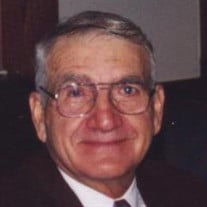 Anthony “Tony” Sineni, 94, of Riverside passed away on Saturday, January 23, 2016 at Royalton Manor in St. Joseph. Family services celebrating his life were held where military rites were conducted and burial took place at Watervliet Cemetery. Memorials may be made to the Coloma American Legion Post 362. Arrangements are by the Davidson Chapel of Florin Funeral Service in Coloma. Please share messages, memories, or photos at www.florin.net. Tony was born on Nov 22, 1921 in Coloma to Frank and Josephine Sineni. He was a proud graduate of Watervliet High School in 1941, where he learned his woodworking craft and also played football and basketball. Tony was a veteran of the US Army during WWII where he was a medical technician and later became an infantry man. He fought in the Battle of the Bulge where he received a Bronze Star for heroic actions and he was one of the first troops to liberate Dachau concentration camp. Tony was a building contractor in Berrien County. He was also a Past Commander of the Coloma American Legion where he was active especially in the spaghetti dinners. He leaves behind his many nieces and nephews; his special niece and nephew and caregivers, David and Karen Heyn; his special friends, Bob Stineman, and Kane Kinyon; his grandchildren, Marci Smith and Lee (Crystal) Stineman; his great grandchildren, Josiah Smith and Landon and Madison Stineman; and his especially close great niece and caregiver, Jennifer Pantelleria. Tony was preceded in death by his parents, his brothers, Sam, Joe, Fred and Paul; his sisters, Nancy, Rose Ambler, and Ann Kennedy; and the love of his life, Virginia Stineman, her daughter, Linda Kinyon, and daughter-in-law, Brenda Stineman.

The family of Anthony "Tony" Sineni created this Life Tributes page to make it easy to share your memories.

Anthony “Tony” Sineni, 94, of Riverside passed away on Saturday,...

Send flowers to the Sineni family.