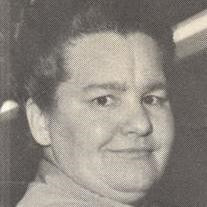 Barbara “Barb” J. Ward, 77, of Benton Harbor, passed away on Sunday, December 18, 2011, at Lakeland Regional Medical Center in St. Joseph. Funeral service celebrating her life will be held at 1:00 P.M., on Friday, December 23, 2011, at the Dey-Florin-Funeral Home, 2506 Niles Ave., in St. Joseph, with Pastor Charles Engler officiating. Burial will be private at North Shore Memory Gardens in Hagar Shores. Visitation will be held on Thursday evening, December 22, from 6:00 until 8:00 P.M., at the funeral. In lieu of flowers, memorials may be made to either Calvary Lighthouse or to the Berrien County Cancer Service. Messages of condolence may be sent to www.florin.net. Barb was born on February 10, 1934, in Benton Harbor. She was one of six children born to Ross and Sarah Albers. She married William W. Ward and together had three children, Robert, Mary and Edwin. Barb worked at various places in southwest Michigan including, Voice of Music, Modern Plastics, Kaywood, and AARP. She enjoyed going to the casino as well as reading and crocheting. Most of all, Barb cherished time spent with her family particularly her grandchildren and great-grandchildren. Barb is survived by her children, Robert Ward, Mary Ward, Peggy Ward; sisters, Marge Muirhead, Murial Elkins, and Margaret Margiotta; brothers, George and Eugene Albers; and by numerous grandchildren, great-grandchildren, nieces, nephews, and cousins. In addition to her parents, Barb was preceded in death by her husband, William and by her son, Edwin; and by her parents-in-law, Willie Ward and Mary Goff.

The family of Barbara "Barb" Ward created this Life Tributes page to make it easy to share your memories.

Send flowers to the Ward family.