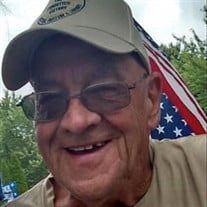 Billie I. McKie, 91, of Lincoln Township died Thursday, January 20, 2022, at the Lakeland Spectrum Medical Center in St. Joseph. Services celebrating his life will be held at 4 PM on Wednesday, January 26, at the Fairplain Chapel of Florin Funeral Service in Benton Township where military honors will be held. Cremation will follow the service. The visitation will begin at 3 PM until service time. Please share messages or memories at www.florin.net. Billie was born on April 13, 1930 in Hastings, MI to Edward and Marian McKie. He was a graduate of Benton Harbor High School. Billie served in the US Air Force during the Korean War and was a former member of the Stevensville American Legion Post. For over 30 years he was a machinist at Clark Equipment Company and Volvo which purchased Clark. Billie retired in 1985 and for the next 10 years he was the maintenance man at the Benton Harbor Library where his wife was a Librarian. His wife, Barbara, preceded him in death in 2006. He enjoyed hunting, golfing, playing horseshoes, and bowling. He loved puzzles and playing on his computer. Billie also enjoyed walking around the mobile home park where he lived. He was always helping other people and he would give you the shirt off his back. His family includes his children, Tamara (Jimmy Wheton) Smith of Lincoln Township and Todd McKie of Lincoln Township; his brother, Buck McKie, of Coloma; his 8 grandchildren, Jessica V, Adam A, Aaron A, Chase S, Corey S, Andrew S, Marjorie M, Cynthia K.; his 14 great grandchildren, and 6 great great grandchildren. He was also preceded in death by his parents, a daughter, Robin Flynn, 1 great grandchild, 3 brothers, and 1 sister.

Billie I. McKie, 91, of Lincoln Township died Thursday, January 20, 2022, at the Lakeland Spectrum Medical Center in St. Joseph. Services celebrating his life will be held at 4 PM on Wednesday, January 26, at the Fairplain Chapel of Florin... View Obituary & Service Information

The family of Billie I. McKie created this Life Tributes page to make it easy to share your memories.

Send flowers to the McKie family.