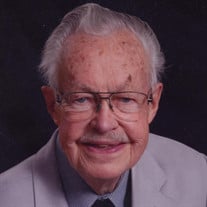 Burton H. Pearson, 92, of St. Joseph passed away on Friday, June 10, 2016 at Caretel Inns in Royalton Township. Services celebrating his life will be held at 11 AM on Wednesday, June 15, at Saron Lutheran Church in St. Joseph. Entombment will follow at North Shore Mausoleum. The family will receive friends and relatives from 5 PM to 8 PM on Tuesday at the Fairplain Chapel of Florin Funeral Service in Benton Harbor. Memorials may be made to Sarett Nature Center or Saron Lutheran Church. Please share memories, messages or photos at www.florin.net. Burt was born on Dec 27, 1923 in Stevensville and was the third child of Joel and Ellen Pearson. Following graduation from St. Joseph High School in 1941, Burt attended Northwestern Univ Engineering School. He was drafted in 1943 and served at the Headquarter Squadron of the US Army Air Corp in Washington. Upon returning to St. Joseph he attended Kalamazoo College and graduated from Western Mich Univ with a B. S. Degree in Business Administration. After college Burt joined the family construction company, Pearson Construction, and became President in 1964. Burt retired in 1999 when his son, Burt II, became President. He married his wife, Jean Anderson in 1949 and together they have celebrated 66 years of marriage. He was a church council member of Saron Lutheran Church for 40 years, a former board member of Sarett Nature Center, a former director of the Inter-City Bank for 17 years, and was a member of the St. Joseph-Benton Harbor Rotary Club. Burt had been a member of both Berrien Hills and Point-O-Woods Country Clubs. Burt’s contributions to our community include many of the buildings we see every day. They include Lake Michigan College, Berrien County Courthouse, Krasl Art Center, St. Joseph City Hall, Priscilla Byrns Heritage Center and Whirlpool Corporation. His company also constructed the Escanaba Water Works, Sisters of Mercy Hospital and Sangren Hall at Western Mich Univ. Many of the commercial buildings and offices in the area were built by his company. His family includes his wife, Jean; his children, Christine (Roger) Petzke, and Burton (Margaret) Pearson, II; his grandchildren, Lars (Liz) Petzke, Nils (Melinda) Petzke, Linnea (Bobby) Walmsley, Anna Pearson, Britta Pearson, and Greta Pearson; his great grandchildren, Carter, Wyatt, Lucas and Finley Petzke and his several nieces and nephews He was preceded in death by his parents; his brothers, Elmer, Forrest, and Vernon; his sister, Pearl (Jean) McColl; his grandson, Frans Petzke and his nephews, Steve and Frederick Pearson.

Burton H. Pearson, 92, of St. Joseph passed away on Friday, June 10, 2016 at Caretel Inns in Royalton Township. Services celebrating his life will be held at 11 AM on Wednesday, June 15, at Saron Lutheran Church in St. Joseph. Entombment will... View Obituary & Service Information

The family of Burton H Pearson created this Life Tributes page to make it easy to share your memories.

Send flowers to the Pearson family.