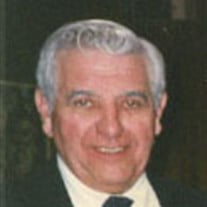 Carl Albert Haldy, 81, of Benton Harbor died Friday, May 2, 2014, at Bronson Hospital in Kalamazoo, after a long courageous battle with Lou Gehrig's disease surrounded by his family. A mass celebrating his life will be held at 11:00 am on Tuesday, May 6, 2014 at St. Joseph Catholic Church in St. Joseph. The visitation will be held from 5 PM to 8PM on Monday, May 4, at the Dey-Florin Chapel of Florin Funeral Service in St. Joseph with a Prayer Service at 7 PM. Burial will be in North Shore Memory Gardens. Memorials may be made to ALS Research. Please share memories, messages or photos at www.florin.net. Carl was born in Holland, MI on June 18, 1932 to Sophie and Carl Haldy. Carl graduated from Benton Harbor High School in 1949 and then attended Lake Michigan College. Carl was a US Army Veteran of the Korean War and a member of the Coast Guard auxiliary. He worked for Whirlpool for 37 years. He had his own service business and was involved in other enterprises. Following his initial retirement from Whirlpool he continued to work for Whirlpool in a variety of capacities until age 72. He volunteered at the Lake Michigan College Mendel Center for 20 years with his wife, Margaret. Carl was an avid reader and enjoyed skiing, sailing, fishing, golf and traveling. He also enjoyed working with his hands and with the help of his wife, built their home in Benton Harbor. Carl was devoted to his family and his beloved dog Mitzi. Carl is survived by his wife, Margaret, of 59 years ; two sons Robert (Kate) Haldy of Kalamazoo, Peter (Penny) Haldy of Bridgman; six grand children, Krystal Daily, Elizabeth Alderson (James), Joseph Haldy (Emma), Kayla Haldy, John Haldy, and Andrea Haldy (Ryan); one great-grandchild Aurbree Dunn; and many nieces and nephews. Carl was preceded in death by his parents; his sister, Barbara Haldy; and his son Carl Peter Haldy.

Carl Albert Haldy, 81, of Benton Harbor died Friday, May 2, 2014, at Bronson Hospital in Kalamazoo, after a long courageous battle with Lou Gehrig's disease surrounded by his family. A mass celebrating his life will be held at 11:00 am on... View Obituary & Service Information

The family of Carl A. Haldy created this Life Tributes page to make it easy to share your memories.

Send flowers to the Haldy family.