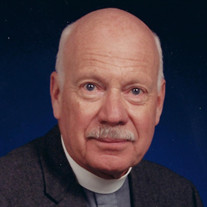 The Reverend Charles F. Frandsen, 98, a longtime resident of Benton Harbor passed away quietly among family and close friends on Friday, January 24, 2020 at the Hanson Hospice Center in Lincoln Township. A Mass of the Resurrection celebrating his life will be held at 1 PM on Friday, Jan 31, at the Episcopal Church of the Mediator at 14280 Red Arrow Highway in Lakeside. The family will receive friends and relatives for a Remembrance Gathering from 6 PM to 8 PM on Thursday at the Fairplain Chapel of Florin Funeral Service in Benton Township. Cremation has taken place. Memorials may be made to the Episcopal Church of the Mediator, St. Augustine’s Church or St. John’s By The Lake Church. Please share memories, messages or photo at www.florin.net. "Father Chuck" as he was known to many, had an irrepressible wit and a famously generous heart - his churches were always open to all, at any time, and he lived that promise every day of his career & his life. He indulged a love of travel his entire life, starting as a young man serving in the FBI in places like Mexico City & Argentina during WWII, to his travels to Japan & Europe in his 80's. Father Chuck was born on June 4, 1921 in Ord, NE to John and Muriel Frandsen. He married his wife, Ianthe, in 1956 and she preceded him in death in 1995. He graduated from Creighton University in 1949 and entered the Episcopal Seminary in 1958. Father Chuck graduated from the Seminary in 1961 with a Master’s Degree. Father Chuck was the rector at St Augustine's of Canterbury Episcopal Church in Benton Harbor from 1971 until 1987, and served after his retirement as a supply priest at many area parishes, including St Luke's in Kalamazoo, St Paul's in St Joseph, and most recently at Church of the Mediator in Lakeside. In tribute to his love for, and service to the congregation, the Nave Rose Window was dedicated to and designed with elements in tribute to Father Frandsen and his family. For several years he was the director of the Y-Uncles Program. He was also active in many community affairs serving on the Boards of the Red Cross, Gateway, Berrien County Cancer Service, Child and Family Services, United Way, Citizens for Youth and as a tutor/mentor at the Juvenile Center. His family includes his 2 sons, John (Shawn) Frandsen of Benton Harbor and Philip (Angela) Frandsen of St. Joseph; his 6 grandchildren, Dane, Trace, Frederick, Daniel, Caroline, and Lucy; his great grandson, Anders. He was also preceded in death by his 2 daughters, Christina in 2003 and Melissa in 2010, his parents, his brother, Sears, and his sister, ElMarie. He lived his 98 years very very well. He loved a good wine, or better yet scotch, and enjoyed a little cigar now & then. He liked jellied cranberry sauce out of the can, liked his burgers & steaks well done (he was teased a LOT about that!), and couldn't get enough chocolate. He was your friend if you asked him to be, and he'd answer the phone no matter who was calling, even after the invention of caller ID. He was an expressive, loud singer, and a relentless joker. M*A*S*H was his all time favorite show, he loved classical music, and he was behind the camera for some of the worst "Super 8" family movies ever made. There is no one that knew him that didn't think he was one of the great men, ever. To all of his parishioners over the years, & all the congregations to whom he spoke, he was and will forever be known as "Father". To all of us, he was Pops.

The Reverend Charles F. Frandsen, 98, a longtime resident of Benton Harbor passed away quietly among family and close friends on Friday, January 24, 2020 at the Hanson Hospice Center in Lincoln Township. A Mass of the Resurrection celebrating... View Obituary & Service Information

The family of Rev Charles F. Frandsen created this Life Tributes page to make it easy to share your memories.

The Reverend Charles F. Frandsen, 98, a longtime resident of...

Send flowers to the Frandsen family.