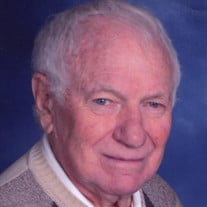 Charles “Glenn” Johns, age 89, of Benton Harbor died at his home on Tuesday, April 26, 2016 with his wife and family at his side. He was born on Dec. 5, 1926 in Negaunee, MI to Richard and Delia Johns. At the age of 17, with the help of his sister’s forged signature, (his mother refused to send her youngest son to war), he joined the Navy and was in the invasion of Okinawa as a Seabee. He was honorably discharged in 1946. Glenn attended Michigan State College as a Horticulture major, then graduated with a Masters in Horticulture. Enrolled in a PhD program at University of Wisconsin, he left the program 6 months short of completion because of family obligations. Moving to SW MI, he established and organized an agriculture consulting business known as Prescription Farming and Nutrilene Fertilizers. He retired his first time in 1990, continuing to supply growers with Nutrilene on a very small scale. With his continued high energy, he went to work at Lakeland Hospital in the Transport Department, a job he enjoyed because of the contact he had with co-workers and patients. Because of declining health he retired for his second time at the age of 79. Glenn planted a large garden each year, favoring Italian varieties of tomatoes and garlic. He canned at least 100 quarts of tomatoes each year. He raised chickens to provide his family with fresh eggs. He loved baking bread each week to share with family that lived in the vicinity. When he was able, he loved walking his dogs, Buster and Lady. Other hobbies were reading and cooking. He was an avid MSU football fan along with the Detroit Lions and Detroit Tigers baseball. Glenn is survived by his wife of 46 years, Nancy; children Michael (Susan) Johns, Cathi (Don) Kurtis, and Mary Ann Johns; his step-children, Mary Jo (Duane) Parker, Douglas Gano, Linda (Drue) Schaffert and Daniel (Vicki) Gano; 9 much-loved grandchildren: Cory, Heather, Jason, Katie, Lisa, Andrew, Haley, Justin and Brittany; 8 great-grandchildren: Trent, Noah, Natalie, James, Carter, Grace, Emmett and Nolan (who is one week old and Glenn was thrilled to see his picture). Glenn is also survived by his children’s mother, Bernadine Johns. He was preceded in death by a son, Martin; a step-daughter, Kathy; his parents and five siblings. Glenn was a member of the St. John-Bernards Catholic Parish where a Mass will be celebrated at St. John Church on Saturday, May 7, 2016 at 10:00 a.m., with lunch to follow immediately after the service in the social hall. Memorial contributions may be made to Lake Michigan Catholic Schools or St. John-Bernards Catholic Parish. Arrangements are by the Fairplain Chapel of Florin Funeral Service.

The family of Charles "Glenn" Johns created this Life Tributes page to make it easy to share your memories.

Send flowers to the Johns family.