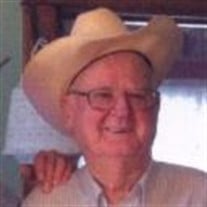 Charlie “CJ” Cannon, 90, of Mishawaka, IN and formerly a long time resident of Watervliet died Thursday, March 22, 2018 at the Golden Living Center in Mishawaka. Services celebrating his life will be held at 2 PM on Monday, March 26, at the Davidson Chapel of Florin Funeral Service in Coloma. Burial will follow in North Shore Memory Gardens. The family will receive friends and relatives beginning at Noon until time of service on Monday at the Davidson Chapel. In memory of CJ please feed the wild birds and get dirty in a garden. Please share memories, messages or photos at www.florin.net. CJ was born on March 17, 1928 in Wolf Bayou, AR to Bufford and Ethel Cannon. CJ married his first wife, Margaret, in 1947 and she preceded him in death in 1996 after 49 years of marriage. He married his second wife, Patsy, in 2000 and together they have celebrated 18 years of marriage. CJ was employed in maintenance at Auto Specialties for many years before retiring 1980. CJ favorite pastimes were tending to his vegetable garden and watching the birds. He had a green thumb and grew his famous tomatoes which he would give to everyone. When visiting relatives in Arkansas he would always give them Michigan apples. He was known as the “Apple Man” to them. CJ also enjoyed cars and motorcycles. He will be remembered for his spirited nature and love of family. His family includes his wife, Patsy; his children, James Cannon of Mishawaka, Charles Cannon of Springfield, MO and Debbie (Rick) Abel of Watervliet; his stepdaughters, Sherry Gunnett of Mishawaka and Becky Clayton of Mishawaka; his 8 grandchildren, Theresa, Jennifer, Chelsea, Miranda, Kodi, Kylie, Crystal, and Tim; his 6 step grandchildren, Bill, Dave, Tracy, Cindy, Jamie, and BJ, and his 25 great grandchildren. He was also preceded in death by his son, Corbett Cannon, and his sister, Oleta Gray.

Charlie &#8220;CJ&#8221; Cannon, 90, of Mishawaka, IN and formerly a long time resident of Watervliet died Thursday, March 22, 2018 at the Golden Living Center in Mishawaka. Services celebrating his life will be held at 2 PM on Monday, March... View Obituary & Service Information

The family of Charlie "CJ" Cannon created this Life Tributes page to make it easy to share your memories.

Send flowers to the Cannon family.