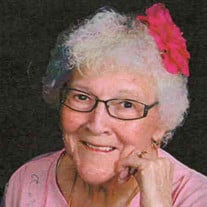 CLARA JEAN SNYDER HARTWIG, age 92, died on September 29th at Hanson Hospice Center. Services celebrating her life will be held at Noon on Tuesday, Oct 3, at the Coloma First United Methodist Church. Burial will follow in North Shore Memory Gardens. Friends and relatives are invited to meet with the family beginning at 11 AM at the Church. The Davidson Chapel of Florin Funeral Service in Coloma is in charge of the arrangements. She was born in Benton Harbor to Sherwood and Bernice Strome Snyder on July 25, 1925, on her father’s birthday. She graduated from Benton Harbor High School with the Class of 1943, and attended Western Michigan University on scholarship for a brief time before returning to Benton Harbor to marry Nylor Hartwig of Eau Claire on March 18, 1944. She was employed by Remington Rand, The Sears Department Store, and spent many years as the coordinator for three beauty salons of the Lion and the Ram enterprises in St. Joseph, Coloma, and Kalamazoo. Earlier employment included the Forsterie Sodus Market, the A & P of Benton Harbor, Stanley Home Products, and many will remember her as the office manager for the St. Joseph YWCA. . She was a member of Coloma United Methodist Church for over 40 years with earlier memberships at New Hope United Methodist Church of Bainbridge Township, and Chapel Hill United Methodist Church of Sodus. She and her husband were awarded the Outstanding Christian Service Award by the Berrien County Association of Churches in 1997. Mrs. Hartwig was a past PTA (local and state) president, a volunteer with the Blossomtime Queen Committee, the Twin City Safety Council, the Berrien County Action Agency, and the Berrien County Association of Churches. She was a founding member of the Michigan One Room School Association. She also served as a 4-H leader for the Chadwick School District. She was a past president of the Auxiliary for Watervliet Community Hospital, where she and her husband volunteered for many years. Together, Nylor and Clara Jean served as lay members of the West Michigan Conference of the United Methodist Church. They also volunteered with the North Berrien Food Pantry and participated in the Tri-City CROP Walk for several years. Both served as youth camp counselors. She is survived by her husband of 73 years, and three daughters: Linda Kaye of Grand Rapids, Michigan, Tia Marie Moroney (Thomas) of Ada, Michigan, and Cathryn Ashley Snyder Mock (John) of Berrien Springs, Michigan. Other survivors include several grand and great grandchildren along with her brother, Sherwood Simon Snyder of Chicago, Illinois. She was preceded in death by her parents, her brother and sister-in-law, Elmer LeRoy and Shirley Ann Snyder, and her son Larry Nylor Hartwig, a God and Country Award Boy Scout. Two son-in-laws also preceded her in death, Roger James Borden and Michael John Heenan. Memorials may be made to: Coloma United Methodist Church, Hanson Hospice Center, and the American Cancer Society.

The family of Clara Jean Snyder Hartwig created this Life Tributes page to make it easy to share your memories.

Send flowers to the Hartwig family.