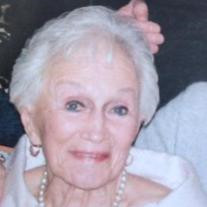 Concetta 'Connie' Faraone Hudnutt, 82 of Coloma, passed away on Saturday, August 11, 2012, peacefully at her home surrounded by her family. Mass of Christian Burial will be celebrated at 11:00, Friday morning, August 17, at St. John Catholic Church, 600 Columbus Street, in Benton Harbor, with Frs. Eugene Sears and Bill Jacobs officiating. Burial will follow at North Shore Memory Gardens in Hagar Shores. Visitation will be held Thursday evening, at the Dey-Florin Funeral Home, 2506 Niles Ave., in St. Joseph from 4 P.M. to 8 P.M. with a Rosary service at 7:30. In lieu of flowers, memorials may be made to either Hospice at Home or to the Michael J. Fox Foundation. Connie was born on March 13, 1930, in Chicago, Illinois to Michael and Mary DiMartino. She married Vincent J. Faraone and together had four children, James Michael, Rosemarie, Theresann and Patricia. The consummate mother and professional, she helped run Vince's Club 33 the restaurant that she and Vince opened in 1964 and then ran solo from 1984 to 1993. All this time, she never lost sight of her most beloved charge in life -- dedicating herself to her life, her family. She will be remembered by many for her warm personality, generosity and personal touch with all that knew her. In 1992, she married Dr. Henry Dean Hudnutt and enjoyed a charmed life together, cooking traveling and enjoying their families. Connie is survived by her children, James Michael Faraone, Rosemarie Faraone, Thererann (David) Seeger and Patricia (William Pike) Faraone all of Chicago, IL. In addition to her parents, Connie was preceded in death by her first husband Vincent in 1983 and second husband Dean in 2001.

Concetta 'Connie' Faraone Hudnutt, 82 of Coloma, passed away on Saturday, August 11, 2012, peacefully at her home surrounded by her family. Mass of Christian Burial will be celebrated at 11:00, Friday morning, August 17, at St. John Catholic... View Obituary & Service Information

The family of Concetta "Connie " Faraone Hudnutt created this Life Tributes page to make it easy to share your memories.

Send flowers to the Hudnutt family.