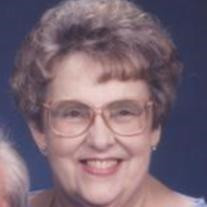 Delores L. “Honey”, 76, Phillips, formerly of St. Joseph, passed away peacefully in her daughter’s arms on Thursday afternoon, December 27, at the Loving Care Home in Berrien Springs, and is now at eternal peace. Mass of Christian Burial will be celebrated at 1:30 P.M., on Monday, December 31, at St. Joseph Catholic Church, 211 Church Street, in St. Joseph with Fr. Robert Creagan officiating. Burial will follow at Calvary Cemetery. A Wake service will be held Sunday afternoon from 3:00 until 6:00 at the Dey-Florin Funeral Home, 2506 Niles Ave., in St. Joseph with the Rosary recited at 6:00. Memorials may be made to Trauma Recovery Associates or for Masses. Messages of condolence may be sent to www.florin.net. Honey was born April 8, 1936 in Benton Harbor. She was one of six children born to Charles and Mary Garlanger. Honey graduated from St. Johns’ Catholic High School in 1954 as co-valedictorian of her class. Honey married Frederick Phillips on September 4, 1954 and together had two daughters. She was a multi-talented musician and seamstress. She enjoyed painting and doing floral arrangements and even began her own craft business - Honey’s Bee Hive. A devout Catholic, she was a long-time member of St. Joseph Catholic Church and an organist at St. John Catholic Church in Benton Harbor. Honey was also a secretary at Lake Michigan Catholic Schools. She was an active member of the Psi Iota Psi Sorority and a director in Recovery Incorporated helping people struggling with anxiety disorders. Most of all, Honey will be remembered as being devoted to her family whom she cherished. Honey is survived by her daughter, Ann (Tom) Phillips Browning of Portage, Michigan; granddaughters, Merritt Ann Grusecki and Laura Elizabeth Browning; son-in-law, Dennis Grusecki of Belleville, Michigan; her siblings, Richard “Dick” (Ruth Ann) Garlanger of Benton Harbor, Doris Bauman, Robert (Sue) Garlanger of St. Augstine Florida, and Chuck (Jackie) Garlenger of St. Joseph; and by numerous nieces and nephews whom she dearly loved. In addition to her parents, Honey was preceded in death by her husband, Frederick in 2002; her daughter, Kathryn Marie (Phillips) Grusecki in 2011; sister, Joan Hyrshko in 1977, and by her brother-in-law, Bill Bauman in 2003.

The family of Delores "Honey" Phillips created this Life Tributes page to make it easy to share your memories.

Send flowers to the Phillips family.