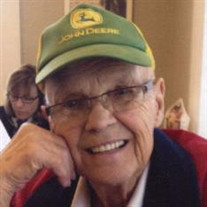 Donald W. Langschwager, 87, of Coloma died Saturday, February 28, 2015 at the Lakeland Regional Medical Center in St. Joseph. A service celebrating his life will be held at 1 PM on Thursday, Mar 5, at the Salem Lutheran Church in Coloma with Rev. Andrew Menz officiating. Burial will be held on Friday at the Roselawn Memorial Gardens in Saginaw. The visitation will be from 2 to 4 PM and 6 to 8 PM on Wednesday at the Davidson Chapel of Florin Funeral Service in Coloma. Memorials may be made to Salem Lutheran Church or the Willows Assisted Living. Please share messages, memories or photos at www.florin.net. Don was born on Aug 23, 1927 in Zilwaukee, MI to Wesley and Adeline Langschwager. He married his wife, Judy, and she preceded him in death in 1994. Together they celebrated over 41 years of marriage. He was shift supervisor at the Palisades Nuclear Plant for over 40 years before his retirement. Don was a US Army veteran of WW II. He was a member of Salem Lutheran Church. He enjoyed gardening and farming. He was also an avid baseball and softball fan both playing and coaching for many years. Don also enjoyed bridge and card games. He was a loving, spiritual and giving individual for his family and friends. Don was the sweetest, most kind hearted man anyone knew. He is survived by his children, Heidi (Richard) Walker of Lowell, MI, Gretchen (Curt Hemphill) Langschwager of Niles, and Kristie (Silvio) Perez of Valparaiso, IN; his daughter-in-law, Betty Langschwager of Bay City; his brother, Ted (June) Langschwager of Zilwaukee; his sister-in-law, Beverly Langschwager of Zilwaukee; his sisters, Ruth Hartley, and Judy (Warren) Rutherford of Zilwaukee; his 11 grandchildren; his 5 great grandchildren, his companion, Fran Letke and his long time friends, Brenda Stovell and Bill Schultz. He was also preceded in death by his son, James, his parents, and his brother, Jack.

Donald W. Langschwager, 87, of Coloma died Saturday, February 28, 2015 at the Lakeland Regional Medical Center in St. Joseph. A service celebrating his life will be held at 1 PM on Thursday, Mar 5, at the Salem Lutheran Church in Coloma with... View Obituary & Service Information

The family of Donald W. Langschwager created this Life Tributes page to make it easy to share your memories.

Send flowers to the Langschwager family.