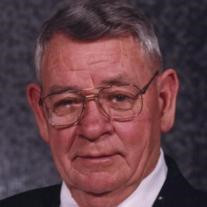 Donald E. Sexton, 83, of Watervliet died Thursday, January 19, 2012, at the South Haven Nursing Home. A Mass celebrating his life will be held at 11 AM on Tuesday, January 24, at the St. Joseph Catholic Church in Watervliet with Fr. John Peter officiating. Burial will be in Keeler Township Cemetery. The family will receive friends and relatives from 5 PM to 8 PM on Monday at the Davidson Chapel of Florin Funeral Service in Coloma where Liturgical Prayers will be held at 7 PM on Monday. Memorials may be made to the family. Please share memories, messages or photos at www.florin.net. Don was born on March 12, 1928 to Ford and Evelyn (Northrup) Sexton. He married his wife, Margaret Zehner, in 1949 and she preceded him in death on June 17, 2007. Together they celebrated 58 years of marriage. Don was a machinist at Whirlpool Corp for over 40 years before retiring 1987. He was always involved with his children’s building projects. He enjoyed playing his banjo and listening to music. After Don retired he wrote a book on his life story which will always be cherished. Don will be missed for all of his wisdom and knowledge. He is survived by his 11 children, David (Shirley) Sexton of Watervliet, Donald (Kathy) Sexton, Jr, of Watervliet, Bonnie Carnell of Grand Haven, Thomas (Jessie) Sexton of Bangor, Marie (Bruce) Pethe of Watervliet, Catherine (Dave) Oakley of Homer, Annette (Don) Nichols of Watervliet, Marge (Greg) Wildeman of Watervliet, Timothy Sexton of Coloma, James Sexton of Watervliet, and Robert (Kirstie) Sexton of Watervliet; his 38 grandchildren; his 28 great grandchildren and his 1 great great grandchild. He was also preceded in death by his parents and a brother, Richard.

Donald E. Sexton, 83, of Watervliet died Thursday, January 19, 2012, at the South Haven Nursing Home. A Mass celebrating his life will be held at 11 AM on Tuesday, January 24, at the St. Joseph Catholic Church in Watervliet with Fr. John... View Obituary & Service Information

The family of Donald E. Sexton created this Life Tributes page to make it easy to share your memories.

Send flowers to the Sexton family.