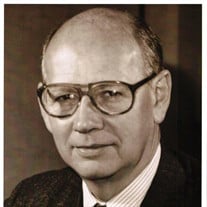 Donald Wooley passed away peacefully in Mystic, CT July 22, 2021, aged 95. Don was born July 7th, 1926 to the late Ruth (Grahn) and Roscoe Wooley on his grandparents’ farm in Coloma, Michigan. He grew up on a farm near by without electricity or running water. He attended a country school where his mother was a teacher. His father was an engineer but had lost his job in the depression. After the depression, the family moved to Jackson, Michigan where Don graduated from high school. He immediately entered a U.S. Navy training program and was commissioned an officer in 1946 while attending Western Michigan College and University of Notre Dame. He served on the USS Okaloosa. Following his Navy experience, he entered University of Michigan at Ann Arbor where he obtained his engineering degree. In 1949 he joined Allis-Chalmers Co. where he held many positions of increasing responsibility including 7 years in New York City, 11 years in England, 4 years in Australia, 3 years in Los Angeles, and 10 years in Milwaukee. He retired as vice-president in 1986 after 37 years with the company. During his service he was responsible for many overseas operations as well as several divisions in the U.S. He visited over 40 countries. After retiring, he and his wife Claire founded Marsh Hill Ltd. to import and sell European antique furniture. This business proved successful and provided even more opportunity for them to travel. The business was sold in 2003 after 17 years. After his second retirement, Don and Claire occupied themselves establishing new homes both in Oconomowoc, WI and Jamestown, RI where Don’s daughter lives. Don felt he had had a full and privileged life. Growing up in a family with a strong work and moral ethic, his moral compass was complemented as a Boy Scout and Scout leader. (He was an Eagle Scout). His international experience gave him a broader understanding of world affairs and contributed to his life-long interest in history. He will be missed. He is survived by his daughter, Kathryn Wooley Dutton, stepchildren Jil, Arn and Marc Franzen, grandchildren Adam and Hillary Dutton, Eli Franzen, Hanna and Justin Hegwer and great grandchildren Benton and Hadley Carey and Callen Dutton. He was predeceased by his first wife, Frances, and their son, Charles as well as his second wife Claire. A private memorial luncheon will be held in Coloma, MI where he will be buried.

Donald Wooley passed away peacefully in Mystic, CT July 22, 2021, aged 95. Don was born July 7th, 1926 to the late Ruth (Grahn) and Roscoe Wooley on his grandparents&#8217; farm in Coloma, Michigan. He grew up on a farm near by without electricity... View Obituary & Service Information

The family of Donald Alan Wooley created this Life Tributes page to make it easy to share your memories.

Send flowers to the Wooley family.