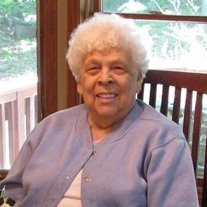 Doris M. Granger, 91, formerly of Benton Harbor, passed away Friday evening, December 13, at Caretel Inns of Linden, Michigan. Local arrangements have been entrusted to the Dey-Florin Funeral Home in St. Joseph. Per the family’s request, cremation has taken place. Memorial services celebrating her life will be held at a later date. Additional information may be obtained at www.florin.net. Doris was born May 15, 1922, in Kalamazoo, Michigan, to Peter and Rose Commissaris. On August 16, 1947, Doris married Kenneth E. Granger and together had two children, Diana and Daniel. She was a long-time member of Lord of Life Lutheran Church in Portage, Michigan. She enjoyed sewing. Most of all, Doris cherished time spent with her family – particularly her grandchildren and great-grandchildren. Doris is survived by her children, Diana (Mark) Kuzinski of Hartland, Michigan and Daniel (Laurie) Granger of Stevensville; 5 grandchildren, Adam (Jill) Kuzinski, Cory (Christine) Kuzinski, Brett Kuzinski and Kristen Henderson and Heather (Steve) Pudell; 8 great-grandchildren; and by her brother, Henry Commissaris; and by her sisters-in-law, Erma Commissaris and Ruth Commissaris. In addition to her parents, Doris was preceded in death by her husband, Kenneth in 1988 and by her siblings, Clarence Commissaris, Esther Sehy, George Commissaris, Harold Commissaris, Robert Commissaris, and Jane Allen.

The family of Doris M. Granger created this Life Tributes page to make it easy to share your memories.

Send flowers to the Granger family.