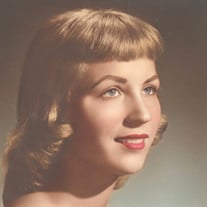 Dorothy (Dot) Mae Shene, 81, Coloma, Michigan passed away the morning of Saturday September 23rd, 2017 after a brief battle with various debilitating heath issues. She was born in Detroit, Michigan July 20th, 1936 to Clarence (Bud) Liggett and Chryseis (Goldie) Metaxa, whom have preceded her in death. Dot was a graduate of Bush/Center Line High School in Centerline, Michigan and worked at various places, her most favorite of which was Square D in Troy, Michigan, where she worked with her father and her future husband. She enjoyed a full life of square dancing, painting and various other crafts, as well as a love for the outdoors and her garden with her husband and high school sweetheart Robert (Bob) Shene. She married Bob soon after his return from the U.S. Navy September 15th, 1956. Bob also preceded her in death in 2012. She was a lady full of spirit and love for her family. Survivors include her children: son Jayson (Jay) Shene and his wife Maggie of South Haven, Michigan; daughter Dawn Buttrum and her husband Brian of Gulf Shores, Alabama; daughter Lynn Shene of Coloma, Michigan; and daughter Paula Ricketts and her husband Bradley of Westfield, Indiana. Also surviving is her sister Sherry Anderson and her husband Chuck of Romeo, Michigan. Dot also has nine surviving grandchildren: Amara Van Lente, Ashley Tait, Courtney Williams, Kevin Shene (all of Michigan); their mother, Jeannie Brown; Nicole Duke and Brandi Buttrum (both of Alabama); Robby Shene (of Michigan); Elizabeth Cournia and Alexander Ricketts (both of Indiana); nine great-grandchildren; and two step-great-grandchildren. She was also preceded in death by a grandson Joshua A. Cournia of Westfield, Indiana. "...I'd like to leave an echo whispering softly down the ways, of happy times, and laughing times and bright and sunny days.." Memorial Services are planned for 2:00pm on Saturday, September 30th, 2017 at Davidson Chapel, Florin Funeral Home 249 East Center Street, Coloma, Michigan 49038 with visitation from 1:00-2:00pm. There will be a celebration of her life following services at 3:30pm at the church of the officiating Pastor Tom Langston on North Shore Drive in Coloma, Michigan. Main dish will be supplied. Please bring a dish to pass and your stories and memories of Dot to share with the family while we enjoy each others company the way Dot would have liked it. (Food may be dropped off at the church at 6365 North Shore Dr., Coloma prior to the visitation.) In lieu of flowers, memorial donation may be directed to the family to assist with the cost of funeral expenses. This may be done by direct mail to the family or by using the Paypal link below. paypal.me/Ricketts365

The family of Dorothy (Dot) Mae Shene created this Life Tributes page to make it easy to share your memories.

Send flowers to the Shene family.