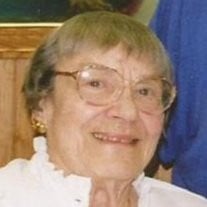 Edith H. Rose, 89, formerly of Watervliet, passed away Monday evening, September 23, at River Ridge Retirement Village in South Haven. Funeral services celebrating her life will be held at 11:00 A.M., on Saturday, September 28, at the Davidson Chapel of Florin Funeral Service, 249 E. Center Street, in Coloma, with Pastor Larry Nail officiating. Burial will follow at the Watervliet City Cemetery. Visitation will be held form 5:00 until 8:00, Friday evening, at the funeral home. Memorials may be made to either Wounded Warriors or to Lakeland Hospice. Messages of condolence may be sent to www.florin.net. Edith was born January 26, 1924 in Coloma. She was one of four children born to Timothy and Mary Fitch. On December 6, 1947, Edith married Bartley Rose and together had two daughters, Roxanna and Judy. She was a devoted wife and mother. Edith knew her Lord and was willing to help anyone in need. Many enjoyed the ‘rewards’ of her cooking and baking skills. She also enjoyed fishing and gardening. In later years, Edith volunteered at the North Berrien Senior Center in Coloma. Edith is survived by her daughters, Roxanna Taylor of Bossier City, LA and Judy (Daniel) Louder of Watervliet; grandchildren, Matthew (Heather) Baker of Bossier City, LA, Stephanie Baker of Bossier City. LA, Timothy Louder of Watervliet, and USAF Staff Sergeant Christopher Baker of Alexandria, VA; and by her great-granddaughter, Harleigh Hutchins. In addition to her parents, Edith was preceded in death by her husband, Bartley; siblings, Ruth Crouch, Walter Fitch, and Johnny Fitch; and by her son-in-law, Paul Taylor.

The family of Edith H. Rose created this Life Tributes page to make it easy to share your memories.

Send flowers to the Rose family.