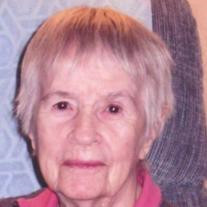 St. Joseph – Edna Mae King, 87, formerly of Benton Harbor, peacefully passed away on Sunday, January 8, 2012, at Royalton Manor in St. Joseph with family by her side. Edna was born on January 18, 1924, in Falkville, Alabama to Bryant Jackson Smith and Savannah Bradford. She married Counard King and they raised five children together: Patricia (Charles) Porter of North Carolina, Roger (Carla) King of Benton Harbor, and Ronald (Teresa) King of Benton Harbor, who survive her. Edna was a homemaker who loved her family dearly. She was always doing something for someone else. She loved country music, a good drink, and being with her family. She will be missed forever. She is also survived by her grandchildren: Danielle, Heather, Samantha, Jennifer, Justin and Brandon Porter, Chris (Shanda) King, Lori, Rachel, and Kalee King; great-grandchildren: Nathan King, Sierra Smith, Olivia and Lucas; by her sister, Marcie (Dale) McReynolds of Kansas, and by a special friend, Edith Fields of South Haven. Mom appreciated the staff at Royalton Manor for their warmth, care, and respect shown towards her and her family. God bless each one of you. Edna was preceded in death by her husband, Counard; two children, Melba Morgan and Kevin King; a grandchild, Moneca May Watson; her parents; her siblings, Hollis, La Vern, Duard, Cora, Lewis, and Edward; and by her long time companion, Andrew (Slim) Davis. Graveside services for Edna will be held at 2:00 PM on Wednesday, January 18, 2012, at North Shore Memory Gardens in Hagar Shores. Memorials may be made to the American Lung Association. Arrangements by the Fairplain Chapel of Florin Funeral Service. We love you, mom.

St. Joseph – Edna Mae King, 87, formerly of Benton Harbor, peacefully passed away on Sunday, January 8, 2012, at Royalton Manor in St. Joseph with family by her side. Edna was born on January 18, 1924, in Falkville, Alabama to Bryant Jackson... View Obituary & Service Information

The family of Edna Mae King created this Life Tributes page to make it easy to share your memories.

Send flowers to the King family.