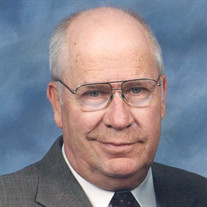 Edward "Ed" Reynolds, 85, of Pipestone Twp., passed from his earthly body, at home, on Wednesday, March 2, 2016. Services celebrating his life will be held at 11 AM on Monday, March 7, at the First Church of the Nazarene in St. Joseph. Burial will follow at Shanghai Cemetery in Pipestone Township. The visitation will be held from 2 PM to 5 PM on Sunday at the Fairplain Chapel of Florin Funeral Service in Benton Harbor. Memorials may be made to the family in Ed’s memory. Please share memories, messages or photos at www.florin.net. Ed was born on May 2,1930, in Olayton, Ohio Co., KY to Charles "Haskel" and Nora "Lena" (Fuqua) Reynolds. Ed was raised and attended school in McHenry, KY until the age of 17 yrs, when he moved to Benton Harbor. He met his wife, Mary "Carlene" (Snodgrass) shortly thereafter and they married a year later on Aug 27, 1949 in Sodus. Together they have celebrated 66 years of marriage. They lived in the village of Eau Claire until 1969 when Edward built a home in Pipestone Township. Ed was employed at the Deaner's Basket Factory and at Bendix Corp. where he retired in 1979 after 25 years. He loved to be outdoors on his farm. In his later years Ed enjoyed tinkering around in his barn. He was a very active man and could repair most anything. He loved to fish with his nephew, Joe, and friend, Jim Downs, (who preceded him in death). Ed was an honorable individual and was a loving family man. Ed is survived by his wife, Carlene; his children, Michael Reynolds of Eau Claire (children: Michelle Jordan and Allison Reynolds), Brenda Reynolds of Baroda (children: Erin and Peter Menser), Keith Reynolds of Eau Claire (children: Cloressa Reynolds, Julia Reynolds, Renee Cox, and Amy Pullins), Craig Reynolds (children: Emily, Stephanie and Bradlee Reynolds); his 13 great grandchildren, Kylie, Jaela, Na’kiya, Benjamin, Trey, BJ, Justin, Marisa, Jake, Jeremiah, Jarin, Caden and Bryson who were very special to him. He was preceded in death by his parents; his sisters, Wilma Culbertson, Louise Merrill, and Rosa Elzey; and his grandson, Seth Reynolds.

Edward "Ed" Reynolds, 85, of Pipestone Twp., passed from his earthly body, at home, on Wednesday, March 2, 2016. Services celebrating his life will be held at 11 AM on Monday, March 7, at the First Church of the Nazarene in St. Joseph. Burial... View Obituary & Service Information

The family of Edward "Ed" Reynolds created this Life Tributes page to make it easy to share your memories.

Send flowers to the Reynolds family.