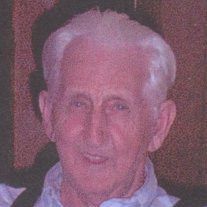 Eugene “Gene” E. DeFields, 90, of Coloma, passed away Sunday evening, October 6, 2013, at Royalton Manor in St. Joseph. Funeral services celebrating his life will be held at 1:00, Friday afternoon, October 11, at the Davidson Chapel of Florin Funeral Service, 249 E. Center Street, in Coloma with Pastor Roy Jeffery officiating. Burial will follow at North Shore Memory Gardens in Hagar Shores. Visitation will be held from 12:00 noon until the time of the service, Friday, at the funeral home. Memorials may be made to the Berrien County Cancer Service. Messages of condolence may be sent to www.florin.net. Eugene was born November 17, 1922, in Coloma. He was one of six children born to Edward and Alma DeFields. He proudly served his country during WWII in the Army Air Corps. On June 4, 1949, Eugene married Lorraine Carlson and together had two daughters, Shirley and Sandy. Eugene worked for 24 years at Deer Forest Amusement Park in Coloma. He also owned and operated Gene’s Salvage Yard in Coloma. He was a life member of both the Coloma American Legion and the American Legion Post #91 in Jackson, Mississippi. Eugene enjoyed outdoor activities including doing yard work, working on cars, doing various construction projects, and camping. Eugene is survived by his daughters, Shirley (Ron) Buck of Watervliet and Sandy (Roy) Neal of Pascagoula, Mississippi; and by his grandchildren, Kristie (Rhett) Johnson, Lori (Gordon) Robertson, Robert Buck and Melinda Buck; and by two great-grandchildren. In addition to his parents, Eugene was preceded in death by his wife, Lorraine; his siblings, Alice Baushke, Joe DeFields, Laurabelle Swift, Jim DeFields, and Lillian Mc Fadden; and by his grandson, Ronald M. Buck.

The family of Eugene "Gene" DeFields created this Life Tributes page to make it easy to share your memories.

Send flowers to the DeFields family.