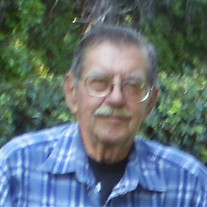 Frank W. A. Nemethy, 83, of St. Joseph passed away peacefully on Saturday, December 26, 2015 at his home. Graveside services for the burial of his ashes will be held at 11 AM on Thursday, Jan. 7, at Riverview Cemetery Cremation has taken place. Following the burial of the ashes on Thursday there will be a celebration of his life gathering at the Tryon School Community Center at the corner of John Beers and Scottdale roads. In lieu of flowers, memorials may be made to the family. Arrangements are by the Florin Funeral Service. Please share memories, messages, or photos at www.florin.net. Frank was born on Sept 18, 1932 in St. Joseph to Frank, Sr. and Stella Nemethy. He married his wife, Joan Stevens, in 1952 and she preceded him in death in 1995. Together they celebrated 43 years of marriage. Frank had been employed over the years at Stefling Foods, the Herald-Palladium, and at Frank Pastrick Dealership. Frank was a long time volunteer fireman for the St. Joseph Township Fire Dept. He was Captain for many years and volunteered from 1950 until 2010. He enjoyed bowling, stamp collecting and playing cards. Frank was a very caring and loving individual who loved each and everyone of his family equally. He leaves behind his children, Sharon Wiltfong of St. Joseph, Mark Nemethy of St. Joseph, Frank (Carmela) Nemethy of Hartford, Denise (Gene) DeMorrow of St. Joseph, Lea Anna Locey of Fairplain, and Vincent Nemethy of Grand Rapids; his brothers, John Nemethy of St. Joseph and Steve Nemethy of Alaska; his sister, Jean Smart of St. Joseph; his 12 grandchildren and 8 great grandchildren. He was also preceded in death by his parents and his grandson, Gene A. Demorrow.

Frank W. A. Nemethy, 83, of St. Joseph passed away peacefully on Saturday, December 26, 2015 at his home. Graveside services for the burial of his ashes will be held at 11 AM on Thursday, Jan. 7, at Riverview Cemetery Cremation has taken... View Obituary & Service Information

The family of Frank W.A. Nemethy created this Life Tributes page to make it easy to share your memories.

Send flowers to the Nemethy family.