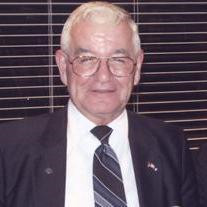 Franklin “Frank” D. Quigley, 78, of Coloma, passed away on Monday morning, December 19, 2011, at Caretel Inns of Lakeland in St. Joseph. Funeral services celebrating his life will be held at 1:00 P.M., Thursday, December 22, 2011, at the Watervliet Free Methodist Church, 7794 Paw Paw Ave, in Watervliet, with Pastor Brian E. Hall officiating. Burial will follow at the Coloma Cemetery with Military Rites. Visitation will be held Wednesday evening, December 21, from 5:00 until 8:00 P.M., at the Davidson Chapel of Florin Funeral Service, 249 E. Center Street, in Coloma. Memorials may be made to either the Watervliet Free Methodist Church or to the church’s food pantry. Messages of condolence may be sent to www.florin.net. Frank was born on May 11, 1933, in Coloma. He was one of 10 children born to John and Ethel (Merrill) Quigley. He was a 1952 graduate of Coloma High School. On July 25, 1959, he married Nancy Hyatte and together had two sons, Wayne and Paul. He worked at the Clark Equipment Company prior to his retirement after 24 years. Frank was a long-time member of the Watervliet Free Methodist Church as well as the Gideon Society. He was a member of the Coloma Ambulance and Fire Department and was a member of the first Coloma City Charter Commission. Frank is survived by his wife, Nancy; son Wayne (Christy) Quigley of Elkhart, Indiana; grandchildren, Jacob, Alayna, Grant, Ross, and Ryan; sister, Martha (George) Darling; and by several nieces and nephews. In addition to his parents, Frank was preceded in death by his son, Paul in 2001; and by his siblings, Alice, Jack, Harold, Art, Leonard, Pat, Mike, and Marty.

The family of Franklin "Frank" Quigley created this Life Tributes page to make it easy to share your memories.

Send flowers to the Quigley family.