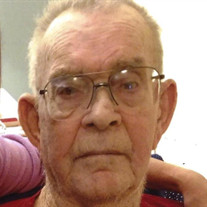 Gaylord C. Lambrecht, 88, of Benton Harbor died Friday, August 18, 2017, at his home surrounded by his family. Services celebrating his life will be held at 11 AM on Thursday, Aug 24, at the Fairplain Chapel of Florin Funeral Service in Benton Township. Burial will follow in North Shore Memory Gardens. You are invited to meet with the family from 5 PM to 8 PM on Wednesday at the Fairplain Chapel. Memorials may be made to The Salvation Army. Please share memories, messages or photos at www.florin.net. Gaylord was born on Feb 24, 1929 in Benton Harbor to Charles and Hazel Lambrecht. He married his wife, Jeanine Hyslop, on Dec 1, 1961 and together they have celebrated 55 years of marriage. Gaylord was employed as a truck driver at Better Building Products in Millburg for 45 years before he retired in 1991. His hobbies included gardening, bowling and hunting. Gaylord was a member of The Salvation Army for 80 years. Some of his activities at The Salvation Army included playing bass horn in the band, being an assistant Scoutmaster, being the bus driver, and working with the youth programs. He was also a member of the League of Mercy. His family includes his wife, Jeanine; his children, Joseph Lambrecht of Benton Harbor, Peggy (James) Spalo of Baldwin, MI and Josephine Mitchell of Seven Springs, NC; his 7 grandchildren; his 5 great grandchildren, his 1 great great grandchild; his sisters, Louadell Williams of Coloma, Juanita Johnson of Batesville, AR and Naomi Allen of TN; his brothers, Marlin (Carol) Lambrecht of Coloma, and Ronald (Evelyn) Lambrecht of Benton Harbor and his many other nieces and nephews. He was preceded in death by his parents, his brothers, Edger, Curtis, Veloris, Olin, Delbert and Kenneth and his sisters, Luzzette and Maradell.

Gaylord C. Lambrecht, 88, of Benton Harbor died Friday, August 18, 2017, at his home surrounded by his family. Services celebrating his life will be held at 11 AM on Thursday, Aug 24, at the Fairplain Chapel of Florin Funeral Service in Benton... View Obituary & Service Information

The family of Gaylord C. Lambrecht created this Life Tributes page to make it easy to share your memories.

Send flowers to the Lambrecht family.