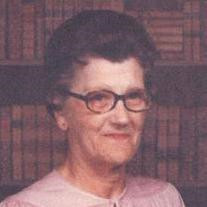 Genevieve “Genny” Weaver, 93, formerly of St. Joseph, passed away on Saturday, December 17, 2011, at Jordan’s Nursing Home in Bridgman. Funeral services celebrating her life will be held at 11:00 A.M., on Wednesday, December 21, at the Dey-Florin Florin Home, 2506 Niles Ave., in St. Joseph, with the Rev. Wade Panse officiating. Burial will follow at North Shore Memory Gardens in Hagar Shores. Visitation will be held Wednesday morning from 10:00 until the time of the service at the funeral home. Memorials may be made to the Berrien County Cancer Service. Messages of condolence may be sent to www.florin.net. Genny was born on August 1, 1918. She was one of 8 children born to Callas and Donnie Lee Bessent. Genny married Milton Weaver and together had two sons. She was a long-time member of the Peace Temple in Benton Harbor and the Royal Order of the Eastern Star. Genny served as treasurer of the Seely-McCord Elementary School PTA. She served as office manager of Weaver Floor Sanding and later Weaver’s Home Repair. Her brother, Don Bessent, was a pitcher for the Brooklyn Dodgers, and Genny enjoyed going to Chicago to watch the Dodgers play. She later followed the Chicago Cubs. She will be remembered for her cooking and baking. Additionally Genny enjoyed bowling, shopping, and gardening. Genny cherished time spent with her family and particularly enjoyed trips to Florida to visit her family. Genny is survived by her grandchildren, Jeff (Donna) Weaver of Sawyer, Kelly (Dean) Slosson of Montgomery, Illinois, Gina Weaver of Eau Claire, Kevin (Amy) Weaver of Greenville, MI, Sheryl (Dave) Kopaceski of Dowagiac, Cindy (Chip) De Long of Chelsea, MI, and Tim Weaver of Dowagiac; 13 great-grandchildren; and by 7 great-great-grandchildren. In addition to her parents, Genny was proceeded in death by her husband Milton in 1989; her sons, Alois and Eugene Weaver; and by 3 brothers and 4 sisters.

Genevieve “Genny” Weaver, 93, formerly of St. Joseph, passed away on Saturday, December 17, 2011, at Jordan’s Nursing Home in Bridgman. Funeral services celebrating her life will be held at 11:00 A.M., on Wednesday, December 21, at the Dey-Florin... View Obituary & Service Information

The family of Genevieve "Genny" Weaver created this Life Tributes page to make it easy to share your memories.

Send flowers to the Weaver family.