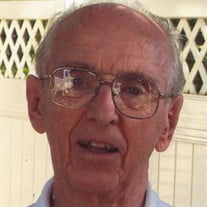 George K. Knapp, 89, of St. Joseph, died early Tuesday morning, Dec. 27, 2016 at Royalton Manor in Royalton Township. Services celebrating his life will be at 11:00 a.m. on Wednesday, January 4, 2017 at the Fairplain Chapel of Florin Funeral Service in Benton Harbor. Burial will follow at North Shore Memory Gardens in Hagar Township. Visitation with his family will be on Tuesday from 5:00 to 7:00 p.m. at the Fairplain Chapel. Memorial donations may be made to the Harbor House or the Alzheimer’s Association. Please share memories, messages or photos at www.florin.net. George was born in Benton Harbor on Feb. 20, 1927 to Roland and Alice (Schultz) Knapp. He graduated from Benton Harbor High School in 1945. He proudly served his country in the US Army during WWII. George married Catherine Kelly on May 19, 1951, and they have celebrated 65 years of marriage. He retired from Whirlpool Corp. in 1987 after 39 years of employment as a machine operator. George was a wonderful family man and a great father and husband. George’s family includes his wife, Catherine; his children, Cynthia (Rex) Byron of Portage, MI., Britt Knapp of Avondale, AZ., Christine (Mike) Carmichael of St. Joseph, Kurt Knapp of Richland, WA, and Sharon (Gary) VandeMerkt of Arlington Heights, IL.; his brother, Lloyd Knapp of Casa Grande, AZ; his sister, Mary Knapp of Benton Harbor; his 8 grandchildren; his 7 great-grandchildren; his sister-in-laws, Elizabeth Knapp of Stevensville and Joanne Knapp of Stevensville, and his several nieces and nephews. He was preceded in death by his parents and his brothers, Lynn and John

The family of George K. Knapp created this Life Tributes page to make it easy to share your memories.

Send flowers to the Knapp family.