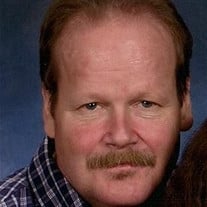 George Frederick "Fred" Pearson passed away Wednesday, May 7, 2014, at home. A Celebration of Life service will be at 1:00 p.m. Saturday May 17, at First Church of God, 2627 Niles Ave., St Joseph, MI 49085, (269) 983-1524 . Pastors David Colp and Kevin Perthuis will officiate. Visitation will take place from 11:30 a.m. - 1 p.m. with a Fellowship Lunch downstairs following the service. Those wishing to share something may do so on the guestbook at www.florin.net. Fred was born June 28, 1959, in St. Joseph to Vern and Gloria (Pitts) Pearson. He is survived by and was happily married to his wife Suzon (Testini) on July 28, 2012. His blended family includes survivors of his mother Gloria (Chris) Pavlides from St. Joseph, his daughter Nicole (Dustin) Van Harn of Stevensville, his brothers Rob (Cathy) Pearson of Grand Rapids and Tom (Debbie) Pearson of St. Joseph, Grandchildren Cannon and Kayla, step-sons Jamie and Boby Testini, 8 step-grandchildren, his father in law John Testini of Benton Harbor, nieces Tricha and Carolyn, nephew Jason Pearson, Uncle Burton (Jean) Pearson of St. Joseph, many cousins, and a special friend he thought of as a son Shane (Piper) Current of Stevensville. Fred was preceded in death by his father Vern (Bones) Pearson in April of 2010, both Pitts and Pearson grandparents, his cousin Steve Pearson, and favorite Uncle Richard Pitts. Fred owned and operated Fred Pearson Construction for 25 years. He grew up among the family business of Pearson Construction which was founded by his late grandfather Joel Pearson. After leaving high school at the age of 16, he obtained his degree in HVAC from Ivy Tech where he was on the Dean’s List. He also paired up in business with his brother, Tom Pearson, and they worked side by side for several years as well. Fred was a person with such a giving heart and he was a donor for the Gift of Life Foundation. He loved to have fun with family and friends, riding motorcycles, Jeeping, and he loved sailing on Lake Michigan. He was a Co-Op Dad for Lakeshore High School and for many misplaced kids. His final resting place will be with his loving mother Gloria.

The family of George Frederick Pearson created this Life Tributes page to make it easy to share your memories.

Send flowers to the Pearson family.