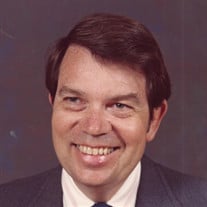 Gerald “Jerry” F. Southland, 89, of St. Joseph died early Wednesday morning, April 13, 2016 at his home with family. Visitation will be held Sunday, April 17 from 4:00 to 6:00 pm at the Fairplain Chapel of Florin Funeral Services in Benton Harbor. Services will be held Monday, April 18, at 3:00 pm at New Apostolic Church in St. Joseph. Memorials may be made to Lakeland Healthcare’s Hospice at Home or the Marie Yeager Cancer Center. Please share memories, messages or photos at www.florin.net. Jerry was born on Dec. 5, 1926 in Muskegon, Michigan to Harm and Ellen (Gornell) Southland. He graduated from Benton Harbor High School in 1944, and was immediately drafted into the U.S. Navy. After serving, he graduated from Purdue University in 1950 as an Aeronautical Engineer and joined Whirlpool Corporation in 1951 as a Regional Service Manager. Jerry married Barbara J. Stillman in 1954, Doris Arent Brown in 1975 and Joyce Osborn Jones in 2004. During his 37 years at Whirlpool, Jerry held many roles, traveled to 76 countries and raised his children in Lebanon and Switzerland for several years. He retired in 1988 as Vice President of the International Sales Division. Upon his retirement, a dear friend and coworker wrote, “What do you say about a guy who has 2 houses, 3 boats, 5 cars, 5 motorcycles, an illegal 3-wheeler, 50 model airplane engines and a camera in every drawer in the house?” Jerry lived and loved with gusto. He was an avid radio control modeler, boater and WWII historian. He was preceded in death by his sister Carol in the 30s, his father Harm in 1987, his aunt Trena in 1999 and his wife Doris and mother Ellen in 2000. Jerry is survived by his wife, Joyce; his children, Jeffery (Cindy) Southland of Indian Harbour, FL; Cynthia Southland of Stevensville; Stephen Southland of Bangkok, Thailand; Mark Southland of Plano, TX; his stepson, Skip (Kathleen) Brown of Lagrange, IL; his 5 grandchildren, Claire, Anna, Julie, Eric, and Steven; and one great grandchild.

The family of Gerald "Jerry" Southland created this Life Tributes page to make it easy to share your memories.

Send flowers to the Southland family.