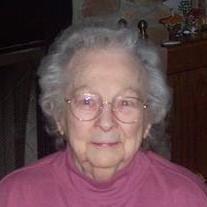 Gertrude E. Baldwin, 86, of Benton Harbor passed away Wednesday, October 26, 2011 at The Willows in St. Joseph, with her family by her side. Services will be held at 2 PM on Saturday, October 29, at the Dey-Florin Chapel of Florin Funeral Service in St. Joseph. Burial will be in North Shore Memorial Cemetery. The family will receive friends and relatives beginning at 1 PM on Saturday. In lieu of flowers, memorial contributions may be made in Gertrude’s name to the Blue Star Mothers of America, Chapter 177 or to Hospice at Home, St. Joseph. Please share memories or photos at www.florin.net. Gertrude was born on October 27, 1924, to John and Grace Tadd, in Dekalb, IL. After graduating from Dekalb Township High School in 1942, she entered the U.S. Army Nursing Cadet Corps, earned her Nursing Degree, and was stationed at the Percy Jones military hospital in Battle Creek where she was to meet and marry a returning wounded soldier and the love of her life. On December 8, 1945, she married Charles Baldwin and moved to his home town of Benton Harbor. Gertrude served as a registered nurse in the St. Joseph Sanitarium (predecessor to Memorial Hospital) and Mercy Hospital, Benton Harbor, retiring in 1980. In 2001, as America went to war in Iraq and Afghanistan, she began sewing Blue Star Banners and sent them to families who had sons and daughters enlisting in the service. This led to her being a driving force behind the establishment of the Blue Star Mothers Chapter 177, sending gifts and necessities to our troops both at home and overseas. Her dedication to the troops was tireless. Gertrude would tell you the most important thing in her life was her family and she gained her greatest joy while in the company of her children, grandchildren, and great grandchildren, playing games or inventing neat “stuff” with old paper towel spools, milk jugs, Kleenex boxes, and whatever else she had “on hand”. She delighted in getting everyone together for parties, whether it was for a birthday, holiday, or just because she wanted one. Her legacy of love and giving will be remembered forever. She is survived by a sister, Zetta (George) Johnstone of Atlanta, GA, a daughter, Gayle Ann Nelson of Springfield, IL, a son, Thomas (Lauren) Baldwin of Benton Harbor, fourteen grandchildren, (Becky, Karen, John, Autumn, Amber, Kelly, Erin, Michael, Viola, Cynthia, Grace, Joshua, Tony and Ann), 25 great-grandchildren and several nieces and nephews. In addition to her parents, Gertrude was proceded in death by her husband, Charles in 2001, her daughter Mary in 1996 and her son John in 2010.

Gertrude E. Baldwin, 86, of Benton Harbor passed away Wednesday, October 26, 2011 at The Willows in St. Joseph, with her family by her side. Services will be held at 2 PM on Saturday, October 29, at the Dey-Florin Chapel of Florin Funeral... View Obituary & Service Information

The family of Gertrude E. Baldwin created this Life Tributes page to make it easy to share your memories.

Send flowers to the Baldwin family.