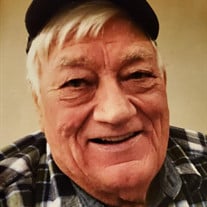 Glen A. Flowers, Sr., Bible study leader, former business owner, laborer, carpenter, equipment operator, general contractor, mechanic, fabricator, and a life-long resident of Benton Township died unexpectedly on Tuesday, November 2, 2021, at his home, he was 83 years young.  Services celebrating Glen’s life will be held at 11 AM on Friday, Nov 12, at the Blue Roof Church (3084 Niles Rd.) in St. Joseph Township.  The visitation will be from 10 AM to 11 AM on Friday at the church. Burial will follow in Keeler Cemetery in Keeler Township where military rites will be held.  Arrangements are by the Fairplain Chapel of Florin Funeral Service in Benton Township.  In lieu of flowers, memorials may be made to “The Movement International” at the Blue Roof Church.  Please share messages or memories at www.florin/net.  Glen was born on July 31, 1938, in Benton Harbor to Charles and Maleda Flowers.  He attended Martindale School which Glen called the University, Benton Harbor Junior High and High School. Glen married the former, Freddie Mae “Fritz” Wilson, on Sept 21, 1956. On a special note, this past September Glen and Fritz celebrated 65 years of marriage.  Soon after, he enlisted in the Air Force and as he was already an “Ace Mechanic”, he honed his skills in the frozen tundra of Labrador and Frobisher Bay. From 1960 to 1970, Glen worked for Carson’s Ford, Brookfield Ford (Watervliet and Berrien Spring), and Ashley’s Ford. In 1970 to 1972 Glen began a new career in construction, pouring concrete at the DC Cook Plant. In 1972 to 1986, Glen was a partner in “B&G Concrete and Construction”. Meijer thrifty Acres and the Orchards Mall were two of their banner projects. In addition, from 1977 to 1986 Glen was a partner in two new business ventures, “Construction Concepts” and “Industrial Maintenance”. After retiring Glen stayed busy assisting several construction companies in the area until 2011.   Glen was a longtime member of the Blue Roof Church. He’s attended and for the past several years, lead the Men’s Bible Study fellowship that began 30 years ago. He’s been involved in several Church ministries, most visibly he greeted people and made them feel welcomed. As an usher he helped people find a comfortable place to sit and more importantly, where the washrooms were.  To Glen, serving the church was the same as serving the Lord, which his life exemplified.   In his early years Glen coached minor and Little League Baseball at Union Park in Benton Harbor, as well as church’s softball for Niles Road Community Church and First Assembly of God.  He liked listening to Bill Gaither’s Homecoming music and years ago he could be found strumming his ol’ banjo.  Glen and Fritz were known to “cut a rug” square dancing, found canning food for the winter, and warmly entertaining friends and family around the kitchen table.  More recently you could find Glen at the coffee shop on Tuesdays and Saturdays with his friends who were retired.  There was little that Glen that couldn’t operate, fix, or build.  Sometimes bring home motorcycles or snowmobiles in bushel baskets, and it wasn’t long before he would have them running in tip top shape.  Glen enjoyed sailing on Lake Michigan, going to car shows, watching street racing, and car restoration programs on TV. Occasionally, Glen and Fritz went camping, four wheeling in Missouri and riding his Honda Goldwing around the country. Using the chassis of a VW Bug, Glen built several street-legal three-wheel trikes for himself, his family, and friends.    What Glen enjoyed most in life, and what his family will miss most, was the love and council he imparted to his family. Every day before he left the house he prayed, for his kids, grandkids, and great grandkids. His common sense and Godly street-smart wisdom will be missed by all. His family included his wife, Fritz; his children, Glenn “Allan” (Grace) Flowers, Jr of Stevensville, Brian (Katie) Flowers of Benton Harbor, Mindy (Dennis) Struble of Coloma and Craig (Barbara) Flowers of Hawaii, his 12 grandchildren, his 8 great grandchildren; his 3 sisters, Florence Hemminger, Judy Gustafson, and Carol Murphy and his brother, Charles Flowers.  He was preceded in death by his parents, 2 grandchildren, Kory Daisy in 2010 and Ben Flowers in 2015: his 4 sisters, Dee, Dorothy, Jeanette, and Kathleen and his 2 brothers Jerry, and Kenneth.

The family of Glen A Flowers Sr. created this Life Tributes page to make it easy to share your memories.

Send flowers to the Flowers family.