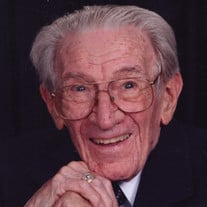 Sunday, March 22, 2015 H. Paul Florin, 92, of St. Joseph died Sunday, March 22, 2015, at the Hanson Hospice Center in Lincoln Township. Services celebrating his life will be held at 11 AM on Friday, March 27, at the St. Joseph First Congregational Church with Rev. Dr. Robert Braman officiating. Burial will be in Riverview Cemetery. The visitation will be held on Thursday from 5 PM to 8PM with a Masonic Service at 7 PM at the Fairplain Chapel of Florin Funeral Service in Benton Harbor. Memorials may be made to Alzheimer’s Research or the Lake Shore Masonic Lodge #298 Scholarship Fund. Please share memories, messages or photos at www.florin.net. Paul was born November 16, 1922 in Owosso, Michigan to Henry P. and Gladys (Bromley) Florin and moved to Benton Harbor in 1924. He graduated from Benton Harbor High School in 1940 and Wayne State University School of Mortuary Science in 1944. Paul married his wife, Marjorie Crandall, in 1944 and she preceded him in death in 1999. He became a partner with his father, Henry, in the family funeral homes in 1946. Paul was honored by the Michigan Funeral Director Association last year for over 70 years of service to his community. Paul was active in many Twin Cities groups and organizations including his church, the Kiwanis, the BH-SJ Elks Club, the Fairplain Board of Education and other civic groups. He was a longtime supporter of Blossomtime serving as President in 1974 and since then as a member of the Board of Director. His love of the ideals of Masonry translated into a lifelong participation in all of the local and state Masonic Groups. He was a Past Master of the Lake Shore Masonic Lodge, Commander in Chief of the DeWitt Clinton Consistory and honored by the Northern Masonic Jurisdiction in 1976 by being elected a 33 Degree mason for his service to Masonry. Paul is survived by his children: John C Florin of Stevensville, Vicki (Al) Popke of St. Joseph, and Jane (Tom) Vitantonio of Portage; his 6 grandchildren: Randy (Buffy) Hall, Blake, Hillary, & Blair Florin, and Paul (Susanne) Vitantonio and Tracy Vitantonio; his 5 great grandchildren: Katie, Tommy, & Lauren Hall, Isabella Vitantonio, and Pyper Florin. He was also preceded in death by a granddaughter, Janie Hall.

The family of H. Paul Florin created this Life Tributes page to make it easy to share your memories.

Send flowers to the Florin family.