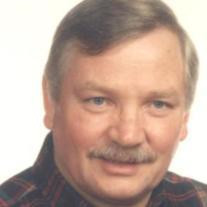 St. Joseph – Hans-Dieter Grisard, 72, of St. Joseph, passed away peacefully at his home on Sunday evening, April 15, 2012. Funeral services celebrating his life will be held at 11:00 A.M. on Thursday, April 19, 2012, at the Dey-Florin Funeral Home, 2506 Niles Ave., in St. Joseph with Fr. Jim Morris officiating. Burial will follow at Riverview Cemetery in St. Joseph. Visitation will be held from 10:00 until the time of the service, Thursday, at the funeral home. Memorials may be made to Hospice at Home or to the St. Joseph Catholic Church. Messages of condolence may be sent to www.florin.net. Hans-Dieter was born on February 9, 1940 in Essen, Germany. He was one of five children born to Johann and Irmgard Grisard. He married Erika Zanona in February 1960 in Germany and together had two children, Detlef and Iris, and moved to the United States in 1965. Hans-Dieter worked for Hughes Plastics for 33 years prior to retirement in 1999. He was a long-time member of St. Joseph Catholic Church and the D.A.N.K. He enjoyed water sports including boating and swimming. Most of all, Hans-Dieter cherished time spent with his family – particularly with his grandchildren and his dog, Eddie. Hans-Dieter is survived by his wife Erika; son Detlef (Rhonda) Grisard of St. Joseph; daughter, Iris (Edward) Turner of Manassas, Virginia; grandchildren, Jarrett, Christopher, Heidi, Matthew, Timothy, and Derek (Jacki); by two great-grandchildren, Peyton and Austin; his sisters, Karin Schimmel, Gisela (Detlef) Zechser, and Dagmar Jaeckel all of Germany; and by numerous nieces and nephews. In addition to his parents, Hans-Dieter was preceded in death by his brother, Reiner.

St. Joseph – Hans-Dieter Grisard, 72, of St. Joseph, passed away peacefully at his home on Sunday evening, April 15, 2012. Funeral services celebrating his life will be held at 11:00 A.M. on Thursday, April 19, 2012, at the Dey-Florin Funeral... View Obituary & Service Information

The family of Hans Dieter Grisard created this Life Tributes page to make it easy to share your memories.

Send flowers to the Grisard family.