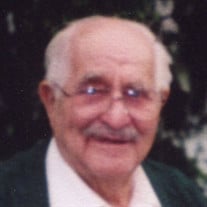 Harold August Skibbe, 100, died on Sunday, August 10, 2014 at the Lakeland Regional Medical Center in St. Joseph. Harold was born in Dowagiac, Michigan on July 13, 1914 to Henry and Emma (Koch) Skibbe. He graduated from Dowagiac High School in 1931, married the former Jeannette Rogien in 1940, and worked for many years with his father on their large fruit farm in Eau Claire. This work led him to invent, design and engineer a particular mechanism to improve farm seeding and fertilizing procedures, for which he was granted a U.S. patent. In 1952 he expanded the Skibbe Manufacturing Co. and built a shop in Sodus for the production and sales of his product, the Skibbe Seed and Fertilizer Spreader, and later added Skibbe Sprayers. Harold ran this business successfully for many years with his wife and father until his retirement and sale of the business in 1982. Harold was a generous, humble and considerate man, whose innate goodness and kindness continued to be exhibited into his advanced age of 100 years. He and his wife were longtime members of St. Paul’s Lutheran Church in Sodus and they were charter members of the Michigan Lutheran High School Association in St. Joseph. He leaves behind to cherish his memory his wife of 74 years, Jeannette; daughter Jean (Whitney) Gee of Atlanta, GA; son, John (Elizabeth) Skibbe, of Milford, MI ; daughter, Ruth (Albert) Hafer, of Sodus; 7 grandsons, Mark, Peter, Andrew and Philip Gee and Chris, Adam, and Nick Hafer; 6 great-grandchildren; and his caregivers for the past 2 years Charles Belin, Michele Verville, Mia Cockrell, and Nolan Martin. Harold was preceded in death by his parents, his brother, Elmer Skibbe and his sister, Eleanor Glass. Funeral services will be held at 11 AM on Thursday, Aug. 14, at the St. Paul’s Lutheran Church in Sodus. Burial will follow in Eau Claire Cemetery. The visitation will be held from 5 pm to 8 pm on Wednesday at the Dey-Florin Chapel of Florin Funeral Service in St. Joseph. Memorials may be made to St. Paul’s Lutheran Church in Sodus or the Michigan Lutheran High School. Please share messages, memories, or photos at www.florin.net. .

The family of Harold A Skibbe created this Life Tributes page to make it easy to share your memories.

Send flowers to the Skibbe family.