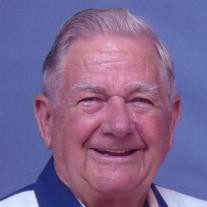 Harry C. Saxman, Jr., 87, of Watervliet, passed away early Saturday morning, November 3, 2012, at his home. Funeral services celebrating his life will be held at 11:00 A.M., on Wednesday, November 7, at the Davidson Chapel of Florin Funeral Service, 249 E Center Street, in Coloma with Pastor Mark Cowell officiating. Burial will follow at the Coloma Cemetery. Visitation will be held Tuesday evening from 5:00 until 8:00 at the funeral home. Memorials may be made to either to the Berrien County Cancer Service, Hospice at Home, Midway Baptist Church, or to the North Berrien Senior Center. Harry was born on December 18, 1924 in Lansing, Michigan to Harry C., Sr. and Blanche Saxman. Harry married Hildred McCoy. He proudly served in the U.S. Coast Guard and was a member of the VFW Post 1137. Harry was the long-time owner of the Comet Inn Restaurant (now the Hot Spot) in Coloma. He retired after 25 years as an USDA Government Inspector. Most of all Harry cherished time spent with his family and particularly enjoyed visits with his grandchildren and great-grandchildren. Harry leaves to cherish his memory his loving wife Hildred of over 53 years; children, Debbie (Mark) Swisher of Watervliet, Neil (Cathy) Saxman of Las Vegas, Nevada, and Nancy (Dan) Lackey of Eustis, Florida; and by 7 grandchildren; and by 10 great-grandchildren. In addition to his parents, Harry was preceded in death by two sons, James L. Brown, Jr., and Steven Saxman; and by his siblings, Richard Saxman, Jeannie Luther and Helen Butts.

Harry C. Saxman, Jr., 87, of Watervliet, passed away early Saturday morning, November 3, 2012, at his home. Funeral services celebrating his life will be held at 11:00 A.M., on Wednesday, November 7, at the Davidson Chapel of Florin Funeral... View Obituary & Service Information

The family of Harry Cree Saxman Jr. created this Life Tributes page to make it easy to share your memories.

Send flowers to the Saxman family.