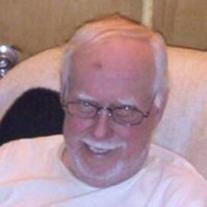 Hartford – Hazen “Fuzzy” Brownlow, Jr., 75, of Hartford, formerly of St. Joseph, passed away early Saturday, December 29, 2012, at his home. Funeral services celebrating his life will be held at 1:00 P.M., on Thursday, January 3, at the Dey-Florin Funeral Home, 2506 Niles Ave., in St. Joseph. Burial will follow at Spring Run Cemetery in Scottdale with Military Rites. Visitation will be held from 11:00 until the time of the service, Thursday, at the funeral home. Memorials may be made to Hospice at Home. Messages of condolence may be sent to www.florin.net. Fuzzy was born August 16, 1937 in St. Joseph, to Hazen, Sr. and Mary Brownlow. He graduated from St. Joseph High School and then proudly served his county in the U.S. Army as a 101st Airborn Ranger. He enjoyed outdoor activities including hunting and fishing. Fuzzy was an avid fan of the Green Bay Packers and NASCAR – particularly of Dale Ernhart and Tony Stewart. Fuzzy retired from the Whirlpool Corporation and was the former owner of the Grand Crossing Tavern. He also enjoyed golf with his “Caddy Shack” league and hosted numerous golf charity events. The Stevensville Station was his “home away from home” where Fuzzy enjoyed spending time with his many friends. Fuzzy is survived by his children, Joseph Brownlow and Leannette (Jeff) Garrison both of Hartford; grandchildren, Katie, Whitney, Josie Brownlow, Cherri McCann, Brandi Perriguey, and Kristi and Julius Brown; step-sons, Darrell and John Howley; step-grandson, Greg Garrison; by his sisters, Bonnie Bartz of St. Joseph and Mary Frances Bower of Lawrence; by his nephew, Bradley Berry; and nieces, Cathy (Gordon Johnson and Melinda Marcelletti. In addition to his parents, Fuzzy was preceded in death by his brother, Beverly.

Hartford – Hazen “Fuzzy” Brownlow, Jr., 75, of Hartford, formerly of St. Joseph, passed away early Saturday, December 29, 2012, at his home. Funeral services celebrating his life will be held at 1:00 P.M., on Thursday, January 3, at the... View Obituary & Service Information

The family of Hazen "Fuzzy" Brownlow created this Life Tributes page to make it easy to share your memories.

Send flowers to the Brownlow family.