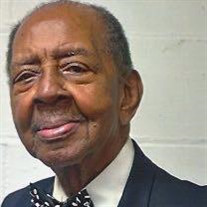 Hosea O. Turner, Sr., 98, of Benton Harbor died Monday, April 3, 2017 at the Alexian Brothers Hospice Residence in Elk Grove Village, IL. Services celebrating his life will be held at Noon on Monday, April 10, 2017 at Second Baptist Church, 600 Donald Atkins Dr., Benton Harbor. Burial will follow at Crystal Springs Cemetery. You are invited to meet with family and friends from 11 AM until the time of the service at the church. Memorial contributions may be made to the 2nd Baptist Church Scholarship Fund. Please share memories, messages or photos at www.florin.net. Hosea was born on Dec. 22, 1918 in Colt, AR to Cornelius and Sally Turner. He was honored by the State of Missouri and the city of Popular Bluff for playing center for the Missouri Basketball League. During that time his high school won 1937-1938 back-to-back State Championships. He attended college at the Lincoln University in Jefferson City. He proudly served his country in the U.S. Army during World War II. He married Vivian Thornton on March 12, 1943, who preceded him in death on Dec. 8, 2011 after 68 years of marriage. Hosea retired from Whirlpool in 1982 after 34 years, working in several capacities. He joined the Second Baptist Church in 1947 and was an active member, singing in various choirs and serving on the Trustee and Deacon Boards. He was a faithful worker helping to remodel and maintain the church. Hosea and his family enjoyed traveling to almost all 50 states touring, camping and fishing. Hosea was a talented, mild mannered and a hard working individual. His family includes his sons, Bertram (Deborah) Turner of Palatine, IL and Hosea, Jr (Anita) Turner of Benton Harbor; his 3 grandchildren, Denise, Nathanael and Joshua; his great grandchild, Skylar, his 1 brother and 4 sisters; and many nieces and nephews.

The family of Hosea O. Turner Sr. created this Life Tributes page to make it easy to share your memories.

Send flowers to the Turner family.