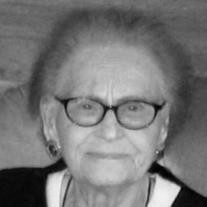 Iva M. Nichols, 93, of Bainbridge Township, passed away on Sunday, February 26, 2012, at her home. Funeral services celebrating her life will be held at 11:30 A.M., on Thursday, March 1, 2012, at the Sodus United Methodist Church, 4071 Naomi Road, in Sodus, with Pastor Russell Logston officiating. Burial will follow at North Shore Memory Gardens in Hagar Shores. Visitation will be held Wednesday evening from 5:00 until 8:00 at the Fairplain Chapel of Florin Funeral Service, 1053 E. Napier Ave., in Benton Harbor. In lieu of flowers, memorial donations may be made to either the North Berrien Historical Society or to Hospice at Home. Messages of condolence may be sent to www.florin.net. Iva was born on January 30, 1919 in Carloc, South Dakota. She was one of eleven children born to John and Hattie Willming. Iva moved to Michigan at a young age. She married Lynn “Pat” Nichols on May 7, 1937, and together celebrated 56 years of marriage. Together they had two daughters, Barbara and Peggy. Iva helped her husband run the Spinks Corners Fruit Exchange for many years. She was a leader in the Spinks Corners 4H Club, a member of the Emblem (Elks Club) ‘Drill Team’, and of the Spinks Corner Service Club. She was a member of the former Union Church and the current Chapel Hill United Methodist Church in Sodus. Additionally she was an enthusiastic supporter of the North Berrien County Historical Society. She enjoyed spending winters in Holiday, Florida. Iva’s home “was always open to gatherings of her extended family” and she showed “unconditional love to everyone.” She enjoyed time spent with her family and friends – and particularly enjoyed their card games. Iva is survived by her daughters, Barbara Nichols of Whittier, California, and Peggy (James) Utterback of Newburyport, Massachusetts; grandchildren, Camille Utterback of San Francisco, California, and J. Matthew (Danielle Stillman) Utterback and great-grandchildren, Leila and Yasmine of Philadelphia, Pennsylvania; brother, Duane Willming of Berrien Springs, and Virginia Piper of Whittier, California; and by many beloved nieces, nephews, and great-nieces and great-nephews. In addition to her parents, Iva was preceded in death by her husband Pat in 1993; and by her siblings, Allan, Dick, Frank, Lyle, Gerald, Louis, and Howard Willming, and Lois Simmons.

The family of Iva M. Nichols created this Life Tributes page to make it easy to share your memories.

Iva M. Nichols, 93, of Bainbridge Township, passed away on Sunday,...

Send flowers to the Nichols family.