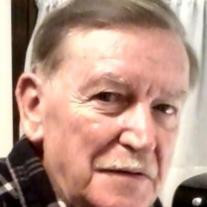 James Robert Chapman, Sr, 73, of Watervliet, Michigan, passed away after a short illness on December 7, 2012, at home in the care of his family and Hospice at Home. The Chapman family would like thank Lakeland Hospital personnel and Hospice at Home personnel for their help during this time. A very special thank you to Jim’s Hospice nurse Bev. Services celebrating Jim’s life will be held at 1 PM on Friday, Dec 14, at the Davidson Chapel of Florin Funeral Service in Coloma. The family will receive friends and relatives beginning at Noon on Friday at the Davidson Chapel. Per Jim’s request, cremation has taken place. Burial will take place at a later date. Memorials may be made to Hospice at Home, the Coloma Legion Post 362’s Sons of the Legion or North Berrien Military Honor Group or to the charity of your choice. Following the service a social time for family and friends will be held at Coloma American Legion Post 362. James was born November 11, 1939, in Sharon, Tennessee, the son of James Edward Chapman and Frances Blondell Rogers Chapman. He spent his childhood years moving between Tennessee and Michigan several times. The final move was in his Junior year when he became a permanent member of the Class of 1957 of Coloma High School. He and his always fun-loving classmates celebrated their 55th reunion in October and Jim enjoyed being a member of the committees for the 15th through the 55th reunions. Three months after graduation he started work at the Whirlpool Administrative Center in the mail room. Forty years later in 1997 he retired from the Ad Center IT Department. During those years he was happy to be part of a group of talented ‘data processing’ personnel who were known for their dynamic work on the old RCA and IBM mainframes and their camaraderie both at work and socially. Jim was a member of the Coloma Rod and Gun Club, Coloma FOP, and a longstanding member of the Coloma Lions Club and the Coloma American Legion Post 362. He entered the legion as a member of Sons of the Legion, his only connection with the father he never met. He also proudly participated as a member of the North Berrien Military Honors Detail where he usually served as the ‘Bugle Boy.’ In 1969, he married Louise Ward and in October they celebrated their 43rd wedding anniversary. Jim is survived by his wife, his children James (Denise) Chapman Jr. of Royal Palm, Fla., Jeannette Edgerton and Michael Chapman, both of Atlantic Beach, Fla, Rebecca (Michael) Chapman-Brown of Evansville, Ind, and Cynthia Chapman of Watervliet; grandchildren Crystal (Anthony) Moore, Christopher LeVelle-Combs, and Quinn Brown; and great-grandchildren Ethan Parris, Dylan Nixon, and Vivienne Moore. Survivors also include his brother Jerry Oliver of Watervliet, and sister D. Eilane Oliver of Hopkinsville, Ky. He was preceded in death by his father, mother, step-father Weldon Oliver, his brother JW Oliver, and infant son Christian Chapman. Jim Chapman never met a stranger. He could talk to anyone about anything. Now, with his signature pen and pad of paper in his chest pocket, he is seeking new frontiers. Of course, he will lend a hand if needed. May God be with you in your new journey Jim. You will be truly missed by family and friends. We love you.

James Robert Chapman, Sr, 73, of Watervliet, Michigan, passed away after a short illness on December 7, 2012, at home in the care of his family and Hospice at Home. The Chapman family would like thank Lakeland Hospital personnel and Hospice... View Obituary & Service Information

The family of James Robert Chapman Sr. created this Life Tributes page to make it easy to share your memories.

Send flowers to the Chapman family.