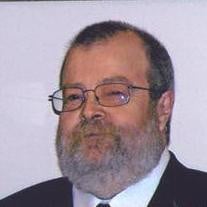 Benton Harbor – James Allen Clark, 58, of Benton Harbor, passed away on Saturday, April 07, 2012 at Lakeland Regional Medical Center in St. Joseph. A ‘casual’ funeral service celebrating his life will be held at 11:00A.M., on Wednesday, April 11, 2012, at the Davidson Chapel of Florin Funeral Service, 249 E. Center Street, in Coloma, with Pastor Billy Long officiating. Burial will follow at North Shore Memory Gardens in Hagar Shores. Visitation will be held this evening, Tuesday, from 5:00 until 8:00 at the funeral home. Memorials may be made to the family. Messages of condolence may be sent to www.florin.net. James was born on June 28, 1953 in Benton Harbor. He was one of five children born to Kenneth and Joan Clark. On July 5, 1980 he married Lisa Edwards and was happily married for nearly 32 years. James worked for 30 years of Teledyne Pier and was an extremely hard worker. He will be remembered for “enjoying life to the fullest” and was “happy as long as he made someone else happy.” He also enjoyed NASCAR and ‘spoiling his dogs.’ Most of all, James cherished time spent with his family and particularly enjoyed going bike riding, fishing, and going ‘mudding’ with his children and grandchildren. James is survived by his wife Lisa; his children, Scott Michael (Danielle Youmens) Clark of Allegan, Angela Lynn Edwards of Benton Harbor, and Toni Marie (Hensley) King of Coloma; grandchildren, Ericka, Jada, Austin, Mallery, Haidyn, and Tanner; brother, Robert (Teri Wright) Clark of Hartford; and by his sister, Karloyn (Kelly Wells, Jr.) Rohloff of Coloma. In addition to his parents, James was preceded in death by his son, Shawn, in 1977; and by his brother Kenneth in 1994; and by his sister, La Donna and 1984.

The family of James Allen Clark created this Life Tributes page to make it easy to share your memories.

Send flowers to the Clark family.