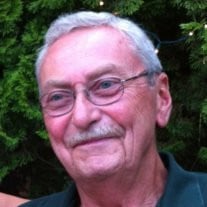 James “Jim” McConville, 69, of St. Joseph died Tuesday, April 30, 2013 at Lakeland Regional Medical Center in St. Joseph surrounded by his family. Services celebrating his life will be held at 3 PM Sunday, May 5, at Trinity Lutheran Church in St. Joseph with Pastor Michael Roth officiating. Cremation will follow the service. The family will receive friends and relatives on Saturday from 4 PM to 7 PM at the Dey-Florin Chapel of Florin Funeral Service in St. Joseph. Memorials may be made to the Trinity Lutheran Church or the Sigma Pi Fraternity Foundation. Please share memories, messages or photos at www.florin.net. Jim was born on Nov 29, 1943 in New York City to James and Jane McConville. During college he became a member of the Sigma Pi Fraternity and continued those relationships over the years. He married Linda Marl on July 1, 1972 and together they have celebrated 40 years of marriage. Jim was an engineer all his life and came to this area in 1970 when he was working for Griffin Corp where he was the branch manager. Over the years Jim also worked for Benton Harbor Screw Co, Wolverine Metal Stampings, Reed Valve Technologies and Vail Rubber. He also ran McConville and Co from 1986 to 1996. His most recent job was with Abtrex in South Bend. He was also a member of the Society of Automotive Engineers and a life member of the NRA. Jim was active at Trinity Lutheran Church where he served on various boards. Jim was an avid Harley rider. He had a “good heart” as Jim would say about others, the strength to see things through, enjoyed life, made people smile and was a good friend to many. Jim was a loving and supportive husband, father, and grandfather who will be dearly missed by all. He is survived by his wife, Linda; his children, Lisa (Richard) Gammons of Buffalo, NY, Jamie Perkins of Silvercreek, NY and Kathleen (Ben) Golay of Danbury, CT; his brother, Edward McConville of New Rochelle, NY and his 5 grandchildren, Richard Gammons, Alexandra Gammons, Ella Perkins, Max Perkins and Shelby Perkins. He was preceded in death by a daughter, Virginia McConville, and a brother, Frank McConville.

The family of James "Jim" McConville created this Life Tributes page to make it easy to share your memories.

Send flowers to the McConville family.