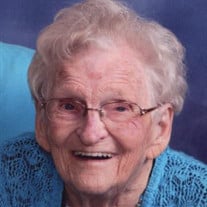 Jeannette Hulda Skibbe, 96, of Sodus died on Thursday, October 20, 2016, of congestive heart failure while on a short stay at Caretel, St. Joseph, MI. Jeannette was born on Sept 25, 1920 in Forest Park, Illinois to Gustav and Hulda Rogien. She worked as a governess to several families in the Chicago area until she moved to join her family in Eau Claire, MI in the 1930s. She was the founder and first librarian of the Millburg and Sodus libraries and later worked at the Eau Claire Library. On June 8, 1940 she married Harold Skibbe at Grace Lutheran Church in Eau Claire. She was involved with the establishment of his business, Skibbe Mfg. Co. in the 1940s. She worked there as the bookkeeper and office manager upon its move to Sodus in 1952. She continued in that role until the sale of the business and their retirement in 1982. She and her husband were longtime members of St. Paul’s Lutheran Church, Sodus where she was active in the Ladies Aid Society. They were also charter members of Michigan Lutheran High School, St. Joseph. She was a devoted wife and helpmate to her husband; a caring mother and good friend to their three children; a doting and willing caregiver to their seven grandsons; an accomplished seamstress, quilter and gardener; a creative partner in a wreath business with her daughter, Ruth; and a loyal and long term friend to many. She leaves behind to cherish her good example of a Christian life, daughters, Jean (Whitney) Gee, Atlanta, GA and Ruth (Albert) Hafer, Niles, MI; daughter-in-law, Elizabeth White Skibbe, of Milford, MI; grandsons, Mark (Samantha) Gee, Parker, CO, Peter (Jennifer) Gee, Lawrenceville, GA, Andrew Gee, Houston, TX, Philip Gee, Atlanta, GA, Chris (Sarah) Hafer, South Bend, IN, Adam Hafer, Mishawaka, IN, and Nick Hafer, Niles, MI; and great-grandchildren Nathan, Sarah and Alyson Gee, and Cody, Jennifer and Aaron Hafer. She was preceded in death by her husband of 74 years, Harold in 2014; son, John of Milford, MI in 2015; and brother, Robert Rogien of Eau Claire, MI in 1991. A note of appreciation is extended to her caregivers Michele Verville, Mia Cockrell and daughter Ruth; for the kindly attention of Dr. Christopher Chu and Dr. Michael Eggebrecht; and the staff at Caretel. . Funeral services will be held at 10 AM on Tuesday, Oct 25, at the St. Paul’s Lutheran Church in Sodus. Burial will follow in Eau Claire Cemetery. The visitation will be held from 5 pm to 7 pm on Monday at the Fairplain Chapel of Florin Funeral Service in Benton Harbor. In lieu of flowers memorials may be made to St. Paul’s Lutheran Church in Sodus or the Michigan Lutheran High School. Please share messages, memories, or photos at www.florin.net.

The family of Jeannette Hulda Skibbe created this Life Tributes page to make it easy to share your memories.

Send flowers to the Skibbe family.