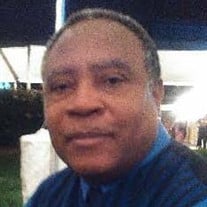 Jeffrey L. Taylor, 54, of Benton Harbor died Sunday, May 15, 2016, at his home. Services celebrating his life will be held at 1 PM on Saturday, May 21, at the Fairplain Chapel of Florin Funeral Service in Benton Harbor. The visitation will... View Obituary & Service Information

The family of Jeffrey L. Taylor created this Life Tributes page to make it easy to share your memories.

Send flowers to the Taylor family.