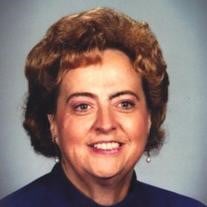 Benton Harbor – Jillene S. Williams, 78, went to be with her Savior on Wednesday, June 20, 2012 at her home in Spinks Corners. Memorial services will be held at 7 p.m. on Monday, July 9, 2012 at Chapel Hill United Methodist Church, 4071 Naomi Road, Sodus. Memorial contributions may be made to Chapel Hill United Methodist Church, Grace Christian School of Watervliet, or Penn Yan Cemetery Association. The family has been served by the Dey-Florin Chapel of Florin Funeral Service, St. Joseph. Messages of condolence may be sent to www.florin.net. A private burial was held in Penn Yan Cemetery, Bainbridge Township. Jill was born on January 24, 1934 in South Haven, the only child of William and Dorothy Knowlton. At age six, they moved to Sodus, and she graduated fourth in her class from Benton Harbor High School in 1952. She attended Lake Michigan College and was a lifelong member of Chapel Hill United Methodist Church. On April 8, 1954, she married Roland Eugene Williams and they resided in Eau Claire on their dairy farm. In 1966 they moved to Spinks Corners and started Williams Orchards, now known as Williams Farms, where she was the farm account manager. Her love for her family was evident through her devotion to her three children. She made certain they were able to learn and experience a variety of activities which would help them throughout their lives. Being a Grandma was one her greatest joys in life along with her lifetime love of music and sports. Jill will be greatly missed by her family and friends who will forever treasure many cherished memories. Jill is survived by her husband, Gene Williams; her children – Sandy Keath, Bruce (Naomi) Williams, and Jeff (Sam Holwerda) Williams, all of Benton Harbor; grandchildren – Chrystal (Joshua) Scott, Ryan (Meredith Broughton) Keath, Kimberly (Chris) Petty, Timothy (Beth) Schmid, Brett (Katie) Williams, Chad (Amber) Williams, Jacky (Chris Casey) Williams, Jacob Williams and Jeremy Burnside; great-grandchildren – Mikayela, Madison, JR, Reaghan, and Kinley Scott, Lanie Broughton, Derek Stuch, Keegen Wheeler, Allen, Alexis, and Olyvia Petty, Nathan Wilder, Audrey and Isaac Schmid, and Jaxon Casey. Her other survivors include two cousins, Judy Fontenex and Kathy (Eddie) Sarisky.

Benton Harbor – Jillene S. Williams, 78, went to be with her Savior on Wednesday, June 20, 2012 at her home in Spinks Corners. Memorial services will be held at 7 p.m. on Monday, July 9, 2012 at Chapel Hill United Methodist Church, 4071 Naomi... View Obituary & Service Information

The family of Jillene S. Williams created this Life Tributes page to make it easy to share your memories.

Send flowers to the Williams family.