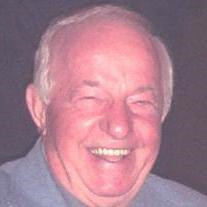 Joseph “Joe” M. Fedro, 82, of Riverside, passed away peacefully on Thursday afternoon, July 12, 2012, at his home. Mass of Christian Burial will be held at 11:00 A.M. on Monday, July 16 at St. Joseph Catholic Church, 179 Lucinda Lane, in Watervliet, with Fr. John Peter officiating. Burial will be private at a later date in Illinois. Visitation will be held Sunday evening, July 15, from 4:00 until 8:00, with a Prayer Service at 7:30, at the Davidson Chapel of Florin Funeral Service, 249 E. Center St., in Coloma. Memorials may be made to either Hospice at Home, the North Berrien Senior Center, or to the St. Joseph Catholic School in Watervliet. Messages of condolence may be sent to www.florin.net. Joe was born on August 14, 1929, in Chicago, to Bartholomew and Caroline Fedro. He married Betty Egan and together had four children. Joe owned and operated the Embassy Club, in Chicago, before moving to Michigan. He later worked at Bridgman High School. Joe was an avid golfer and a member of the Lake Cora Golf Course in Lawrence. He was an avid Chicago White Sox fan. Most of all, Joe cherished time spent with his family. Joe is survived by his wife Betty of 63 years; children, David (Linda) Fedro of Orland Park, Illinois, Steven (Karen) Fedro of Crown Point, Indiana, and Joanne (Donald) Turney of Fort Wayne, Indiana; daughter-in-law, Sandra Fedro of Oak Forest, Illinois; his grandchildren, Christopher (Morgan), Joseph, and Steven Fedro, and Adam and Alyssa Turney; and by his sister, Alice Skurnak. In addition to his parents, Joe was preceded in death by his son, Randy Fedro; his granddaughter, Erin Fedro; and by his 3 brothers and 2 sisters.

The family of Joseph "Joe" M. Fedro created this Life Tributes page to make it easy to share your memories.

Send flowers to the Fedro family.