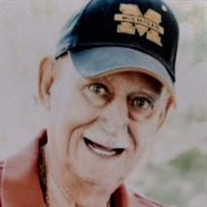 Joseph Giudice, 83, of Coloma, passed away Monday night, October 12, 2015, in the comfort of his home. Services celebrating his life will be held at Noon on Friday, Oct 16, at the Fairplain Chapel of Florin Funeral Service in Benton Harbor. The visitation will be from 5 PM to 8 PM on Thursday at the Fairplain Chapel. Memorials may be made to the Wounded Warrior Project or the American Cancer Society. Please share memories, messages, or photos at www.florin.net. Joe was born December 11, 1931 in Coloma to Domenick and Mamie Giudice. He was a veteran of the US Army during the Korean War. After completing his tour of duty, he returned to Michigan and began a 34 year career with Michigan Tube Company, retiring as the General Manager. On January 16, 1953, Joe’s life became complete when he married the former Shirley Scates. Joe and Shirley were married 53 years before she passed away in 2005. Joe was very active in community organizations. He was a member of the Coloma American Legion Post 362, a life member of the Veterans of Foreign Wars Post 6803, associate member for Lodge 147, and a member of Loyal Order of Moose Lodge 1570. He also played a role in the lives of area youth. He could be seen regularly at Little League and Babe Ruth baseball games as a coach or umpire. In his leisure time, he enjoyed time with his friends at the bowling alley or on the golf course. He was an avid bowler, and was the past President of Blossomland Bowling Association, and a member of its Hall of Fame. He also enjoyed time on the golf course participating in up to three golf leagues per week. Most of all Joe cherished his time with family – particularly time with his daughters and grandchildren. He was a loving father, grandfather (PaPa), and great grandfather Joe is survived by his daughters, Vikki Wade of St. Joseph, Sherrie Gill of South Bend, and Robin Giudice of Benton Harbor; seven grandchildren; eleven great grandchildren; 2 grand pets; a special nephew who was like a son, Dino (Noell) Giudice of Mishawaka, IN, his sister, Helen McMahan of AR and many nieces, nephews and countless friends. Joe was also preceded in death by his parents, his sons, Mike Giudice and Jeffrey Giudice; his brother, Leo Giudice and 2 great granddaughters, Malaysia and Makayla.

Joseph Giudice, 83, of Coloma, passed away Monday night, October 12, 2015, in the comfort of his home. Services celebrating his life will be held at Noon on Friday, Oct 16, at the Fairplain Chapel of Florin Funeral Service in Benton Harbor.... View Obituary & Service Information

The family of Joseph Giudice created this Life Tributes page to make it easy to share your memories.

Send flowers to the Giudice family.