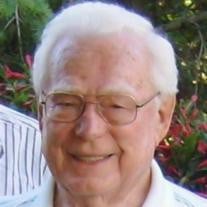 Joseph John Ursprung, 87, passed away Friday, June 3, 2011, at Crown Pointe Senior Living Community in Stevensville, MI. Joseph was born March 19, 1924, in Goedre, Baranya, Hungary, the son of Johann and Theresia (Renner). In 1927 his parents immigrated with him to Leamington, Ontario, Canada. He attended elementary school in Mersea Township and attended high school in Leamington. Joseph enlisted in the Canadian Armed Forces in 1943, attending basic training at Camp Borden, Ontario where he received advanced training in tanks. He was placed with The First Hussars of London, Ontario during WW1 and was involved in the Normandy invasion on June 6, 1944 at Courseulles, Berniers and St. Aubin. When the war was declared over on May 8, 1945, the First Hussars were transported to the Netherlands where Joseph attended the University of Groningen while awaiting a return ship to Canada. He disembarked the Queen Mary in Halifax Harbor in January, 1946 and was demobilized at the London Armory in Ontario. Upon his return to Canada, Joseph completed his college prerequisites at the University of Western Ontario in London, and he received his BA in organic chemistry in 1951 from Queens University, Kingston, Ontario. He received his MA in chemistry from Queens University in 1952. Joseph obtained his PhD in 1955, majoring in Organic Chemistry with a minor in Biochemistry at the University of Illinois where he met Joanne Arnheim, also in the PhD program. Joseph and Joanne were united in marriage June 5, 1955 in Brooklyn, NY. Joseph was employed as Research Scientist with The Pfizer Corporation in Groton, Connecticut for four years before accepting a position in pharmaceutical research with The Upjohn Company in Kalamazoo, MI in 1959. While at The Upjohn Company, Joseph designed Minoxidil to lower blood pressure which is still used today for the short term treatment of severe, intractable hypertension under the name Loniten. After discovering that when taken orally, Minoxidil stimulated hair growth all over the body, Joseph and his colleagues found that hair growth could be limited to specific areas when applied topically. It was then developed for the treatment of baldness in both men and women under the name Rogaine. Another drug Joseph had primary responsibility for developing and for which Joseph was most proud, was Prostin VR. “Blue babies” is a term to describe babies born with a congenital deformity in the heart, blocking blood from reaching their lungs, requiring immediate, emergency open heart surgery to correct the defect. Joseph and his colleagues discovered that infusing prostaglandin E1 into these babies opened the ductus arteriosis and rerouted the blood flow so that part of the blood gets to the lungs for oxygenation, enough to keep the baby alive until surgery could be scheduled at a time when the surgeon was more confident of a successful outcome. This simple maneuver increased the survival rate for “blue babies” from 30% to 70%. Joseph and Joanne retired to Kauai, Hawaii in 1989 where Joseph immersed himself in the study of Hawaiian history, culture, anthropology and language. He took courses at Kauai Community College and became involved in the Kauai Historical Society and did a lot of research in Hawaiian and Polynesian history. They moved to Sun City Grand in Surprise, Arizona in 2003 to be closer to their grandchildren, and moved into Crown Pointe Senior Living Community in Stevensville, Michigan March, 2011. Joseph is survived by his wife, Joanne; two children, David (Cyndi) Ursprung of St. Joseph, MI, Timothy (Angela) Ursprung of Sugar Hill, GA; eight grandchildren: Tyler, Kristen, Andrew, Michael and Benjamin of St. Joseph and Matthew, Jessica and Caroline of Sugar Hill; one sister, Catharine (Wolfgang, deceased) Hauessler of Kingsville, Ontario and several nieces and nephews. A celebration of life service will be held in early July; friends and family members will be notified of the details. Arrangements are by the Dey-Florin Chapel of Florin Funeral Service in St. Joseph. 269-983-1514. Please share memories or photos at www.florin.net. Memorials may be made to Hospice at Home in St. Joseph or your local hospice.

The family of Dr. Joseph John Ursprung created this Life Tributes page to make it easy to share your memories.

Send flowers to the Ursprung family.