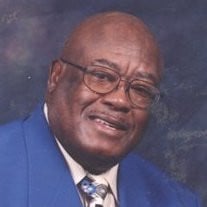 Joshua Cooper, 81, formerly of Benton Harbor, passed away Tuesday, February 26, 2013, at Goshen, Indiana Hospital. Funeral services will be held on Friday, March 8, 2013, at 11:00 a.m. at the Greater Faith Apostolic Church, 1995 E. Britain, in Benton Harbor. The Elder Joe Cunningham will officiate. Friends may view from 10:00 a.m. until the time of the service at the church. Burial will be in North Shore Memory Gardens in Hagar Shores with Military Rites. Arrangements have been entrusted to the Fairplain Chapel of Florin Funeral Service. Messages of condolence may be sent to www.florin.net. Mr. Cooper was born August 23, 1931 in Caruthersville, Missouri to the union of Joshua and Viola Davis Cooper, both of whom preceded him in death. He was a member of Greater Faith Apostolic church and was a deacon. He was employed by Auto Specialties for 29 ½ years until it closed in 1980. He then worked for several security companies until the 90’s, when he worked for Alreco Metals as a receiving clerk. He retired in 1996. He was preceded in death by his first wife, Christine Cooper in 1996; daughter, Latoria Skjordal; son, Gregory Cooper; sister, Emma May Cobbs; and his grandson, Xavier Steward, Jr. He leaves to mourn his wife, Peggy Cooper of Benton Harbor; sons, Stephen Cooper of Houston, TX, Darrell (Lashonda) Cooper of Benton Harbor, and Kenny Cooper of Atlanta, GA; daughters, Jacqulyn Cooper of Benton Harbor, and Betty (Bennie) Smith of Benton Harbor; 19 grandchildren; 34 great-grandchildren; sister, Charlie Smith of Benton Harbor; a host of nieces, nephews and friends; my grandson and special best friend, James (Kateisha) Bell, III; and also my special little grannies, Tyrese Miller, Aujanae Miller and Jayda Miller.

The family of Joshua Cooper created this Life Tributes page to make it easy to share your memories.

Send flowers to the Cooper family.