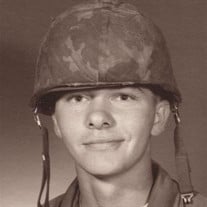 Karl D. Wojcikiewicz, 68, of Royalton Township, died peacefully on Wednesday, October 21st, at Lakeland Regional Medical Center in St. Joseph. His sons were with him when he passed. Mass celebrating his life will be held at 10 am on Saturday, October 24th, at St. Joseph Catholic Church in St. Joseph. Burial with military honors will follow in Lincoln Charter Township Cemetery. Following the burial, there will be a gathering to remember Karl from 1 pm to 4 pm at the Stevensville American Legion Post #568, 3093 Johnson Rd, Stevensville. Visitation will be from 5 pm to 8 pm on Friday at the Rose Center of the St. Joseph Catholic Parish, 301 Wayne St., St. Joseph. In lieu of flowers, memorials may be made to Stevensville American Legion Post #568. Arrangements are by Florin Funeral Service. Please share memories, messages, or photos at www.florin.net. Karl was born on September 27th, 1947, in Pittsburgh, PA to Stanley and Helen Wojcikiewicz. He served in the Marine Corps in Vietnam and attended Duquesne University with an Air Force ROTC scholarship. He retired from the Air Force as a Captain and moved to Michigan, where he raised his family. He retired from Bosch-Rexroth in 2009. Karl was a member of the VFW, the Marine Corps League, and the Stevensville American Legion Post, where he served two terms as commander. He was a member of the St. Joseph Catholic Parish for 35 years, where he sang in the choir, served as a cantor, and joined the Knights of Columbus. He was a skilled woodworker and a collector of all things military. He also enjoyed target shooting and setting off 4th of July fireworks. Karl was a special person, caring and outgoing, and he touched many lives. He was well-loved by his family and his many friends. He is survived by his sons, Steven Wojcikiewicz of Austin, TX, and Benjamin Wojcikiewicz of Bedford, IN; his brother, Daniel Wojcikiewicz of Hilton Head, SC; his sister, Wanda Hughes of Harmer Township , PA and his four grandchildren, Morgan, Rory, Paul, and Claire.

Karl D. Wojcikiewicz, 68, of Royalton Township, died peacefully on Wednesday, October 21st, at Lakeland Regional Medical Center in St. Joseph. His sons were with him when he passed. Mass celebrating his life will be held at 10 am on Saturday,... View Obituary & Service Information

The family of Karl D. Wojcikiewicz created this Life Tributes page to make it easy to share your memories.

Send flowers to the Wojcikiewicz family.