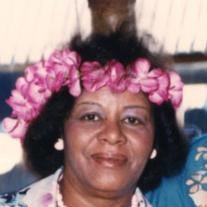 Kathryn Elizabeth Johnson, 84, of Benton Harbor, passed away early on Saturday, September 1, 2012, at New Orchard Grove Extended Care Centre in Benton Harbor. A home-going service, celebrating Kathryn’s extraordinary life, will be held Friday, September 7, at the Greater Community Christian Fellowship Church of God in Christ, 870 Nate Wells Drive, in Benton Harbor, with Elder Nathaniel Wells, III officiating. Family hour will begin at 11:00 followed by the home going service beginning at noon. Interment will follow at Crystal Springs Cemetery. Memorials may be sent to the church. Funeral arrangements have been entrusted to the Dey-Florin Funeral Home in St. Joseph. Messages of condolence may be sent to www.florin.net. Kathryn was born on March 21, 1928 in Madison, Wisconsin. She was the youngest of ten children born to William and Henrietta Baird. She married Carroll Johnson and from that union they had three children, Craig, Ray and Carole. Both parents were strong advocates of attaining ‘excellence in education.’ As an example for their children, the couple relentlessly pursued and obtained their GED. During her residence at Orchard Grove Extended Care Centre, Mrs. Johnson was widely known and respected by the care-giving staff as a “motherly figure” and was endearingly addressed as “Miss Kathryn.” She worked faithfully at Senior Nutrition Center for over 35 years as a Food Service Delivery Assistant. She exhibited a strong abiding faith in the Lord Almighty, through tirelessly serving and encouraging those to whom she touched. Kathryn unwaveringly cherished her love for her children, grandchildren, great-grandchildren, relatives and friends. Kathryn is survived by her children, Elquin Ray Johnson and Carole Taylor both of Benton Harbor; grand-daughters, Regina (Adrian) Baker, Carla Johnson both of Grand Rapids, Kathryn (Darin) Corneilus of Benton Harbor; grandsons, Cole Taylor of Winnipeg, Manitoba, Canada and Roen Taylor of Washington, D.C.; and by 5 great-grandchildren; devoted special niece, Geraldine Gray of Benton Harbor; godson, Keith Davis of Benton Harbor; special niece, Jeane Scott, of Vandalia, Michigan; and special friend, Beverly Tucker of Benton Harbor. In addition to her parents, Kathryn was preceded in death by her husband Carroll; her son Craig; her sisters, Mattie Young, Martha Hunter, Pauline Walters, Estella Gray, and Mary Ann Mitchell; and by her brothers, William, Nimrod, Milton, and Eugene Baird.

The family of Kathryn Elizabeth Johnson created this Life Tributes page to make it easy to share your memories.

Send flowers to the Johnson family.