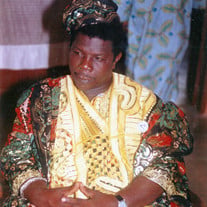 Kofi Edoh Benjamin Amedekanya, 57, of Canal Winchester, Ohio died on Tuesday, April 8, 2014, at the Pickering Hospice in Lancaster, Ohio. Services celebrating his life will be held at 11 AM on Monday, April 14, at the Fairplain Chapel of Florin Funeral Service in Benton Harbor. The visitation will be begin at 10 AM on Monday at the Fairplain Chapel. Burial will follow in Crystal Springs Cemetery in Benton Harbor. Please leave message, memories, or photos at www.florin.net. Kofi was born on October 21, 1956, in Danyi-Elavonyo, Togo, West Africa to the union of Josephine and Michel Amedekanya. He taught French, geography and history in Togo until 1998. He enjoyed soccer and eventually became a coach. He had a passion for politics and he fought against injustice. Because of this and the violence in his home country, Kofi was granted asylum in the USA and became a citizen in Oct of 2013. He entered Kellogg Community College in 1999 to learn English and graduated with an Associate’s Degree in 2001. He completed his Bachelor’s Degree in 2003 at Western Michigan University. Kofi then moved to Ohio where he graduated with a Doctorate’s Degree from Ohio State University in 2005. He taught French and his studies took him to Canada and France where he continued to excel in every area of his studies including his writing skills. He also published 4 children’s novels. Kofi passion was education and he became a certified teacher in the Dept of Educaton. At the time of his death he was a public school teacher in Canal Winchester, Ohio. He leaves to cherish his memory; his wife, Christine (Amedekanya) Washington; his children, Guy. Dodji, Mireilie, Davi, and Kossijean Amedekanya-Edoh; his stepchildren, Melinda, Neadalant, and Cain Washington; his brother, Pierre Atsou; his sisters, Elisabete, Marie, Therese, and Atsoufui Amedekanya, and his 2 grandchildren. He was preceded in death by his parents, and a stepson, Abel Washington.

Kofi Edoh Benjamin Amedekanya, 57, of Canal Winchester, Ohio died on Tuesday, April 8, 2014, at the Pickering Hospice in Lancaster, Ohio. Services celebrating his life will be held at 11 AM on Monday, April 14, at the Fairplain Chapel of... View Obituary & Service Information

The family of Kofi Edoh Benjamin Amedekanya created this Life Tributes page to make it easy to share your memories.

Send flowers to the Amedekanya family.