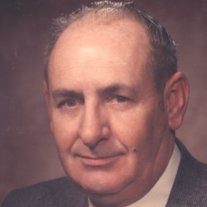 Mission, Texas and Richland, Michigan – LaVern “Bud” French, 82, formerly of Sister Lakes, passed away Monday evening, February 11, in Mc Allen, Texas. Funeral services celebrating his life will be held Monday, February 18, at 11:00 A.M. at the Davidson Chapel of Florin Funeral Service, 249 E. Center Street, in Coloma, with Pastor Whitney Brown officiating. Burial will follow at the Coloma Cemetery. Visitation will be held Sunday 2:00 until 5:00, and 6:00 until 8:00 at the funeral home. Memorials may be made to either the American Heart Association or to the Galesburg (MI) Congregational United Church of Christ. Messages of condolence may be sent to www.florin.net. Bud was born June 19, 1930, near Richland, Michigan. He was one of five sons born to Bert and Marion French. Bud proudly served his country during the Korean Conflict. He later attended WMU to obtain his Aviation degree where met his wife, Ruth Ann Urban. They married on June 16, 1956 and together they had four daughters. Bud worked at the Whirlpool Corporation as an aircraft mechanic and pilot, and later for the Sundstrand Corporation in both Dowagiac and Rockford, Illinois. He retired in 1990 after setting up Flight Operations for Columbia Pictures in Burbank, California. Bud served as president of the Professional Aviation Maintenance Association (PAMA) and also served as membership chair while that organization was growing. After retirement, Bud and his wife traveled to the “many places he had seen from the air” including an entire summer driving Canada and Alaska. Additionally, he enjoyed ice fishing, visiting historical places, and “talking with people wherever he went.” Most of all, Bud cherished time spent with his wife and family. Bud is survived by his wife, Ruth Ann; daughters, Loranne (Jim) Shields of Chicago, Nancy (Dan) Ely of Commerce Township, MI, Eileen (Mike) Shields of Dowagiac, and Karen (Arnie, Jr.) Garritano of Maineville, Ohio; 11 grandchildren; and 5 great-grandchildren. In addition to his parents, Bud was preceded in death by his brothers, Richard, Maurice, Lawrence and Robert French.

The family of LaVern "Bud" French created this Life Tributes page to make it easy to share your memories.

Send flowers to the French family.